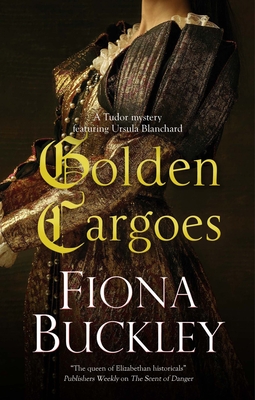 This is book number 21 in the Ursula Blanchard Mystery series.

The queen's half-sister, Ursula Stannard, returns to solve another Tudor mystery in this page-turning tale of suspicious riches, murder and hidden treasures - can she find the golden cargoes?

May 1589. Being the queen's half-sister and occasional secret agent, can take its toll, which is why Ursula Stannard is looking forward to the simple pleasure of attending the wedding of her tenant's daughter. But on arrival, Arabella the bride-to-be is refusing to marry her intended. Ursula tries to reason with Arabella on behalf of her mother, Joan Mercer, but she senses all is not well with her betrothed, or within the Mercer household. The family have gold and jewels beyond their means, and Ursula suspects they may not have gained such riches legally. When the strangled corpse of local herbalist and suspected witch is found, and Ursula learns through her connections at Court that English vessels are being plundered by a trio of mysterious ships - she once again takes on the mantle of secret agent. With someone willing to kill to protect their secrets and a bounty of golden cargo at stake, Ursula is in danger Can she uncover the culprits, save the reluctant bride, and remain unscathed herself?

Golden Cargoes is the twenty-first book in the popular Ursula Blanchard series which follows Ursula, a most unconventional Tudor spy as she solves unpredictable, compelling mysteries.
Fiona Buckley is the author of twenty previous Ursula Blanchard mysteries including A Web of Silk, The Scent of Danger, Forest of Secrets and, most recently, Shadow of Spain. Under her real name, Valerie Anand, she is the author of numerous historical novels including the much-loved Bridges Over Time series. Brought up in London, she now lives in Surrey.