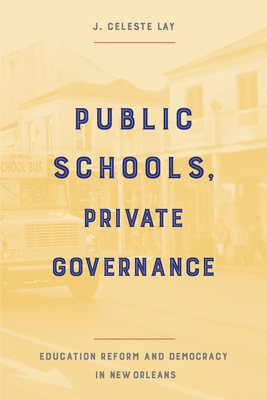 Two months after Hurricane Katrina, Louisiana took control of nearly all the public schools in New Orleans. Today, all of the city’s public schools are charter schools. Although many analyses mark the beginning of education reform in New Orleans with Katrina, in Public Schools, Private Governance, J. Celeste Layargues that the storm merely accelerated the timeline for reforms that had inched along incrementally over the previous decade. Both before and after Katrina, white reformers purposely excluded Black educators, community members, and parents.

Public Schools, Private Governance traces the slow, deliberate dismantling of New Orleans’ public schools, and the processes that have maintained the reforms made in Katrina’s immediate aftermath, showing how Black parents and residents were left without a voice and the officials charged with school governance, most of whom are white, with little accountability. Lay cogently explains how political minorities disrupted systems to create change and keep reforms in place, and the predictable political effects—exclusion, frustration, and resignation—on the part of those most directly affected.

J. Celeste Lay is an Associate Professor of Political Science at Tulane University and the author of A Midwestern Mosaic: Immigration and Political Socialization in Rural America.

“Public Schools, Private Governance is a vital study of education and inequality in America. It is also a very good read. Celeste Lay explores the remarkable overhaul of public education in New Orleans after Hurricane Katrina, using this controversial episode to generate political insights that travel far beyond the case itself. The book offers a highly original, empirically grounded account of profound changes in policy and governance, clarifying why they happened and how, going forward, they transformed local politics. Lay has produced one of the best studies I have read in the past decade on the local interplay of policy and politics. The analysis of how race and class inequalities establish conditions for policy change and shape responses to policy change is outstanding.”—Joe Soss, Cowles Professor for the Study of Public Service at the University of Minnesota

“In Public Schools, Private Governance, Lay provides a new and compelling explanation of the dramatic changes to the school system in post-Katrina New Orleans, arguing that the architecture for these reforms was in place long before Katrina and intentionally excluded— and continues to exclude—Black voices in decision making. Drawing on a rich set of data, including surveys, documents, and focus groups, Lay presents a necessary counternarrative to dominant views about the ‘success’ of these education reforms, which have increased students’ performance on test scores, but, as she argues, threaten the democratic control of public schools. This book will be of great interest to political  scientists and education scholars interested in the politics of race, privatization, and education in the United States.”—Huriya Jabbar, Associate Professor in the Department of Educational Leadership and Policy at the University of Texas at Austin