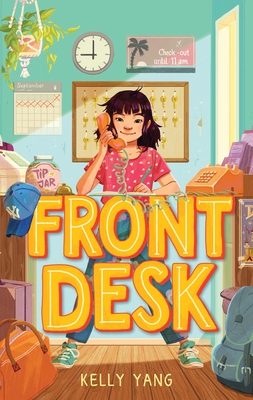 “A well-balanced book that shows one young Chinese girl’s experience of immigrating with her family to California. Funny, heart-wrenching, and innovative, this book shows the difficulties of starting over in a new country in a way that a young reader is able to understand. A great book to open our eyes to the different and sometimes unseen ways people struggle and how we can make the world a better place by being more inclusive and willing to listen to each other’s stories.”
— Jessica Palacios, Once Upon a Time, Montrose, CA

Kelly Yang is the author of Front Desk, which won the 2019 Asian/Pacific American Award for Literature and was chosen a Best Book of the Year by multiple publications, including NPR, the Washington Post, and the New York Public Library. Kelly's family immigrated to the United States from China when she was a young girl, and she grew up in California, in circumstances very similar to those of Mia Tang. She eventually left the motels and went to college at the age of 13, and is a graduate of UC Berkeley and Harvard Law School. She is the founder of The Kelly Yang Project, a leading writing and debating program for children in Asia and the United States. Her writing has been published in the South China Morning Post, the New York Times, the Washington Post, and the Atlantic. To learn more about her and the Front Desk books, visit frontdeskthebook.com.