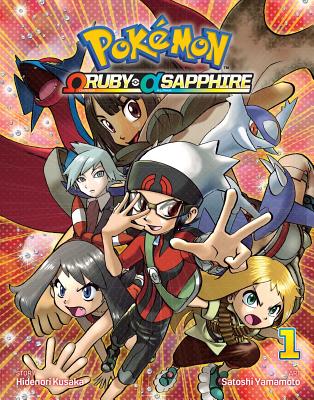 This is book number 1 in the Pokémon Omega Ruby & Alpha Sapphire series.

Awesome adventures inspired by the best-selling new Pokémon Omega Ruby and Alpha Sapphire video games and picking up where the Pokémon Adventures Ruby and Sapphire saga left off!

Years have passed, and now Sapphire and Emerald are training in the new techniques of Mega Evolution to prepare for the next crisis of epic proportions. And they’ll need Ruby’s help!

A giant meteor is hurtling toward the planet! Searching for a way to change its course, Ruby journeys to the Sky Pillar to earn the trust of Zinnia, the Lorekeeper of the mysterious Draconid tribe. Does she have the key to saving the world?

And what does all this have to do with Legendary Pokémon Rayquaza?
Hidenori Kusaka is the writer for VIZ Media’s Pokémon Adventures. Running continuously for over 20 years, Pokémon Adventures is the only manga series to completely cover all the Pokémon games and has become one of the most popular series of all time. Kusaka is currently working on the 14th story arc, Pokémon: Sun & Moon. In addition to writing manga, he also edits children’s books and plans mixed-media projects for Shogakukan’s children’s magazines. He uses the Pokémon Electrode as his author portrait.