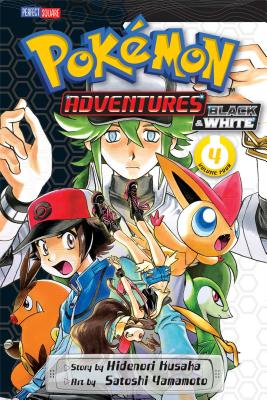 This is book number 4 in the Pokémon Adventures: Black and White series.

Pokémon Trainer Black meets White, a Pokémon Trainer who runs a growing talent agency for performing Pokémon. Will Black catch show biz fever too? Meanwhile, mysterious Team Plasma is urging everyone to release their beloved Pokémon into the wild! What are they thinking?!

A thrilling meeting with one of the Elite Four strains Black’s brain. Then, it’s opening night for White’s Pokémon musical! Will everything go off without a hitch...? Not likely! And what will happen when another Trainer lures away White’s star performer, Tepig Gigi?

Plus, will White ever overcome her fears and learn to battle with her Pokémon?!
Hidenori Kusaka is the writer for VIZ Media’s POKÉMON ADVENTURES. Running continuously for over twenty years now, POKÉMON ADVENTURES is the only manga series to completely cover all the Pokémon games and has become one of the most popular series of all time. Kusaka is currently working on the 12th and 13th story arcs, POKÉMON X・Y and POKÉMON ΩRUBY αSAPPHIRE. In addition to writing manga, he also edits children’s books and plans mixed-media projects for Shogakukan’s children’s magazines. He uses the Pokémon Electrode as his author portrait.