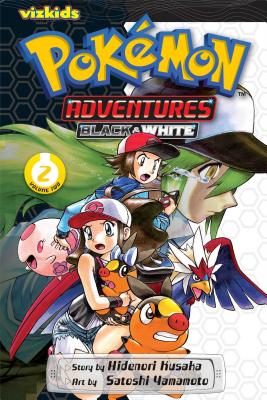 This is book number 2 in the Pokémon Adventures: Black and White series.

Pokémon Trainer Black meets White, a Pokémon Trainer who runs a growing talent agency for performing Pokémon. Will Black catch show biz fever too? Meanwhile, mysterious Team Plasma is urging everyone to release their beloved Pokémon into the wild! What are they thinking?!

And now Team Plasma member N has the nerve to tell Black he isn’t in touch with his Pokémon’s feelings. Them’s fighting words—literally! Which of the two Trainers has the best relationship with his Pokémon? And will that help him win a heated Pokémon battle against the other?

Then, who kidnapped Black’s Munna...?!
Hidenori Kusaka is the writer for VIZ Media’s Pokémon Adventures. Running continuously for over 20 years, Pokémon Adventures is the only manga series to completely cover all the Pokémon games and has become one of the most popular series of all time. Kusaka is currently working on the 14th story arc, Pokémon: Sun & Moon. In addition to writing manga, he also edits children’s books and plans mixed-media projects for Shogakukan’s children’s magazines. He uses the Pokémon Electrode as his author portrait.