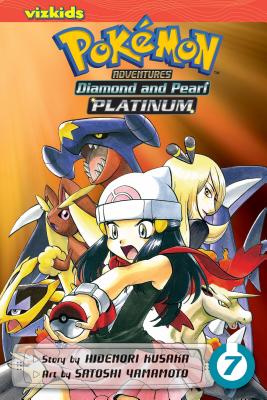 This is book number 7 in the Pokémon Adventures: Diamond and Pearl/Platinum series.

Team Galactic commanders Jupiter, Mars and Saturn are determined to bomb Lake Verity, Lake Valor and Lake Acuity to awaken the Legendary Lake Pokémon that dwell in their depths! Diamond, Pearl and Platinum divide forces to stop them—but can they conquer?

Then, when things go awry, it’s...Diamond  to the rescue?!

Plus, meet Abomasnow, Tangrowth, Buizel, Gastrodon, Purugly, Staravia, and Luxray!
Hidenori Kusaka is the writer for VIZ Media’s Pokémon Adventures. Running continuously for over 20 years, Pokémon Adventures is the only manga series to completely cover all the Pokémon games and has become one of the most popular series of all time. Kusaka is currently working on the 14th story arc, Pokémon: Sun & Moon. In addition to writing manga, he also edits children’s books and plans mixed-media projects for Shogakukan’s children’s magazines. He uses the Pokémon Electrode as his author portrait.