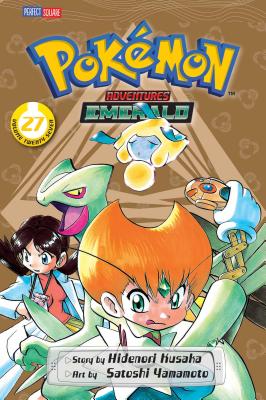 This is book number 27 in the Pokémon Adventures series.

When a mysterious armored villain in search of the Wish Pokémon Jirachi attacks Noland, Emerald is the prime suspect! Jirachi grants wishes, but only awakens every one thousand years for seven days. How can Emerald and the Frontier Brains prevent Jirachi’s power from falling into the wrong hands?!
Hidenori Kusaka is the writer for VIZ Media’s Pokémon Adventures. Running continuously for over 20 years, Pokémon Adventures is the only manga series to completely cover all the Pokémon games and has become one of the most popular series of all time. Kusaka is currently working on the 14th story arc, Pokémon: Sun & Moon. In addition to writing manga, he also edits children’s books and plans mixed-media projects for Shogakukan’s children’s magazines. He uses the Pokémon Electrode as his author portrait.