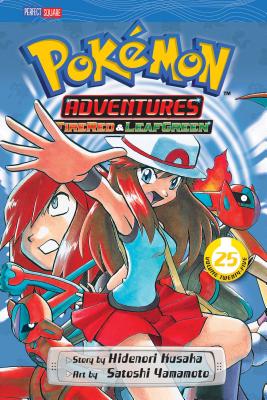 This is book number 25 in the Pokémon Adventures series.

One of Team Rocket’s Three Beasts turns against their leader Giovanni and seeks to usurp his power. Silver learns a shocking secret about his family. Red and Mewtwo hazard a daring escape. And—whoa! The Team Rocket airship is about to crash-land!

Then, in a battle between powerful Legendary Pokémon Mewtwo and Mythical Pokémon Deoxys, who will triumph...?!
Hidenori Kusaka is the writer for VIZ Media’s Pokémon Adventures. Running continuously for over 20 years, Pokémon Adventures is the only manga series to completely cover all the Pokémon games and has become one of the most popular series of all time. Kusaka is currently working on the 14th story arc, Pokémon: Sun & Moon. In addition to writing manga, he also edits children’s books and plans mixed-media projects for Shogakukan’s children’s magazines. He uses the Pokémon Electrode as his author portrait.