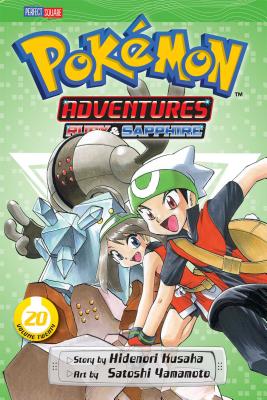 This is book number 20 in the Pokémon Adventures series.

Legendary Pokémon Kyogre and Groudon are unleashed, and the world descends into chaos! Ruby and Sapphire head down to Seafl oor Cavern to try and stop them. To make matters worse, Archie and Maxie, the leaders of evil Team Aqua and equally evil Team Magma, are controlling Kyogre and Groudon with the Blue Orb and the Red Orb. Or are the Legendary Pokémon controlling them...?!

Meanwhile, has Wally built up his strength enough to train with Ruby’s father, Gym Leader Norman?
Hidenori Kusaka is the writer for VIZ Media’s Pokémon Adventures. Running continuously for over 20 years, Pokémon Adventures is the only manga series to completely cover all the Pokémon games and has become one of the most popular series of all time. Kusaka is currently working on the 14th story arc, Pokémon: Sun & Moon. In addition to writing manga, he also edits children’s books and plans mixed-media projects for Shogakukan’s children’s magazines. He uses the Pokémon Electrode as his author portrait.