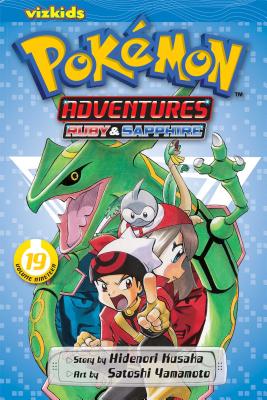 This is book number 19 in the Pokémon Adventures series.

Ruby is losing friends by the minute...! Why does Sapphire never want to see his face again? And why has one of Ruby’s Pokémon run away? Meanwhile, the Hoenn region is on the verge of destruction as two Legendary Pokémon clash in the depths of the ocean—and only Ruby knows how to reach them to intervene!

Then, what will happen when evil Team Aqua and equally evil Team Magma team up?!
Hidenori Kusaka is the writer for VIZ Media’s Pokémon Adventures. Running continuously for over 20 years, Pokémon Adventures is the only manga series to completely cover all the Pokémon games and has become one of the most popular series of all time. Kusaka is currently working on the 14th story arc, Pokémon: Sun & Moon. In addition to writing manga, he also edits children’s books and plans mixed-media projects for Shogakukan’s children’s magazines. He uses the Pokémon Electrode as his author portrait.