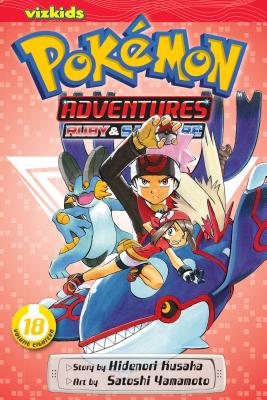 This is book number 18 in the Pokémon Adventures series.

Ruby arrives in Verdanturf Town ready to participate in his first Hoenn region Pokémon Contest. It looks like his dream of becoming the Pokémon Contest Champion is finally back on track! But soon he gets sidetracked yet again when he is asked to rescue a Trainer from a Rusturf Tunnel collapse. Could Team Magma be behind this latest unnatural disaster...?

Then, both Ruby and Sapphire begin a losing streak...

Meanwhile, the Hoenn Gym Leaders can’t agree... Which group is evil? Team Magma or Team Aqua...or both?!
Hidenori Kusaka is the writer for VIZ Media’s Pokémon Adventures. Running continuously for over 20 years, Pokémon Adventures is the only manga series to completely cover all the Pokémon games and has become one of the most popular series of all time. Kusaka is currently working on the 14th story arc, Pokémon: Sun & Moon. In addition to writing manga, he also edits children’s books and plans mixed-media projects for Shogakukan’s children’s magazines. He uses the Pokémon Electrode as his author portrait.