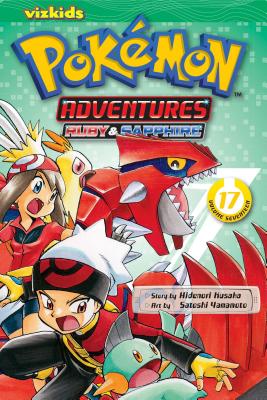 This is book number 17 in the Pokémon Adventures series.

On an accidental seafaring adventure in a submarine, Ruby discovers something mysterious deep beneath the waves. Then fishing nets him another Pokémon. But is his growing team bringing him closer to—or farther from—his dream? Next, Ruby must face his scariest opponent yet...his father! Meanwhile, Sapphire is having trouble getting in her quota of Gym battles. One Gym Leader wants to just hand her a badge without a proper fight! And another has been...kidnapped?!

And how are Team Magma and Team Aqua responsible for Ruby and Sapphire’s difficulties?
Hidenori Kusaka is the writer for VIZ Media’s Pokémon Adventures. Running continuously for over 20 years, Pokémon Adventures is the only manga series to completely cover all the Pokémon games and has become one of the most popular series of all time. Kusaka is currently working on the 14th story arc, Pokémon: Sun & Moon. In addition to writing manga, he also edits children’s books and plans mixed-media projects for Shogakukan’s children’s magazines. He uses the Pokémon Electrode as his author portrait.