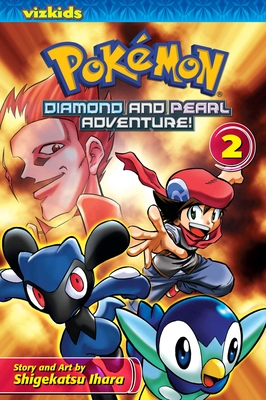 This is book number 2 in the Pokemon series.

New friends, new lands, and all-new Pokémon: Return to one of the greatest adventures!

Most kids spend their days at school, but not Hareta. Raised in the wild by Pokémon, he can climb as high as an Aipom, swim as fast as a Magikarp, and even eat bark like a Bidoof!

Hareta, Mitsumi and their Pokémon friends continue on their quest to find Dialga, the Legendary Pokémon that rules time!

As they journey through the land of Sinnoh, Hareta and his partner Piplup grow stronger every day--while ruining Team Galactic's schemes and getting into plenty of Pokémon battles along the way!

In Celestic Town, they come across the first major clue to Dialga's whereabouts but discover that Cyrus, Team Galactic's boss, has beat them to it. After battling with Cyrus, Hareta's even more determined to improve his skills as a Trainer. Luckily, he meets just the man to help him do it: Canalave City Gym Leader Byron, one of the toughest teachers in all of Sinnoh. Will Hareta and Piplup be able to pass Byron's test at the Fortress of Steel?
Shigekatsu Ihara's other manga titles include Pokémon: Lucario and the Mystery of Mew, Pokémon Emerald Challenge!! Battle Frontier, and Dual Jack!!