Fire and Brimstone: The North Butte Mining Disaster of 1917 (Paperback) 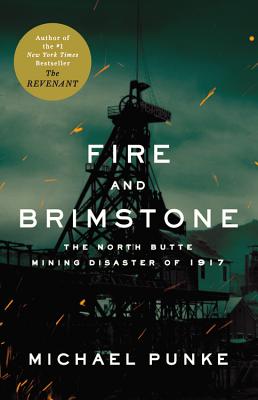 Fire and Brimstone: The North Butte Mining Disaster of 1917 (Paperback)


Usually Ships in 1-5 Days
The author of the #1 New York Times bestseller, The Revenant -- basis for the award-winning motion picture starring Leonardo DiCaprio -- tells the remarkable story of the worst hard-rock mining disaster in American history.

A half-hour before midnight on June 8, 1917, a fire broke out in the North Butte Mining Company's Granite Mountain shaft. Sparked more than two thousand feet below ground, the fire spewed flames, smoke, and poisonous gas through a labyrinth of underground tunnels. Within an hour, more than four hundred men would be locked in a battle to survive. Within three days, one hundred and sixty-four of them would be dead.

Fire and Brimstone recounts the remarkable stories of both the men below ground and their families above, focusing on two groups of miners who made the incredible decision to entomb themselves to escape the gas. While the disaster is compelling in its own right, Fire and Brimstone also tells a far broader story striking in its contemporary relevance. Butte, Montana, on the eve of the North Butte disaster, was a volatile jumble of antiwar protest, an abusive corporate master, seething labor unrest, divisive ethnic tension, and radicalism both left and right. It was a powder keg lacking only a spark, and the mine fire would ignite strikes, murder, ethnic and political witch hunts, occupation by federal troops, and ultimately a battle over presidential power.
Michael Punke serves as the U.S. Ambassador to the World Trade Organization in Geneva, Switzerland. He has also served on the White House National Security Council staff and on Capitol Hill. He was formerly the history correspondent for Montana Quarterly, and an adjunct professor at the University of Montana. He is the author of The Revenant and Last Stand: George Bird Grinnell, the Battle to Save the Buffalo, and the Birth of the New West. His family home is in Montana.

"Compelling if horrifying account of the fire and the trapped men is the heart of this yarn, its soul is Punke's historical contextualization of the event. He paints a vivid picture of a city, state and nation in the grip of industrial monopolies."—Publishers Weekly

"Punke presents this timely story in a strong and readable manner."—Library Journal

"One of the great tales of the 19th-century West."—The Salt Lake Tribune

"An absorbing story Punke, clearly at ease writing about politics, Washington and the law, uses the strike and the disaster's aftermath to reveal the circular nature of corruption in company towns. It is difficult to read these passages and not think of the Sago mine disaster in West Virginia and not wonder why in the near century since, safety for miners had still not improved significantly in the US."—Los Angeles Times Book Review

"Reads with the immediacy of today's tragic headlines. Fire and Brimstone combines a driving narrative energy with the authority of detail only the most careful research can reveal."—William "Gatz" Hjortsberg, author of Odd Corners and screenwriter of Legend

"Punke's recounting of the struggle of the others to survive is tense, exciting, and even inspiring. He tells an equally interesting story of the ethnic conflicts, anti-war protests, and labor warfare."—Booklist