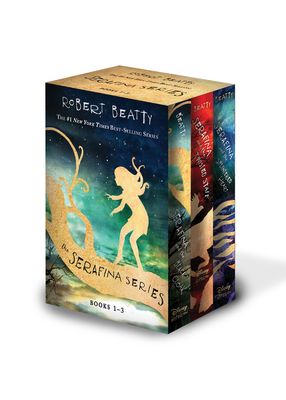 The #1 New York Times best-selling Serafina series by Robert Beatty is now available in a paperback boxed set!
Serafina and the Black Cloak "Never go into the deep parts of the forest, for there are many dangers there, and they will ensnare your soul."Serafina has never had a reason to disobey her pa and venture beyond the grounds of Biltmore Estate.There's plenty to explore in her grand home, although she must take care to never be seen. None of the rich folk upstairs know that Serafina exists; she and her pa, the estate's maintenance man, have secretly lived in the basement for as long as Serafina can remember.But when children at the estate start disappearing, only Serafina knows who the culprit is:a terrifying man in a black cloak who stalks Biltmore's corridors at night.
Serafina and the Twisted Staff Serafina's defeat of the Man in the Black Cloak has brought her out of the shadows and into the daylight realm of her home, Biltmore Estate. Every night she visits her mother in the forest, eager to learn the ways of the catamount. But Serafina finds herself caught between her two worlds: she's too wild for Biltmore and too human to fully join her kin. For Serafina to defeat this new evil, she must search deep inside herself and embrace the destiny that has always awaited her.
Serafina and the Splintered Heart The storms are coming.... Something has happened to Serafina. She has awoken into a darkness she does not understand, scarred from a terrible battle, only to find that life at Biltmore Estate has changed in unimaginable ways. Old friends do unthinkable things and enemies seem all around.With only days to achieve the impossible, Serafina fights to reclaim herself as the Guardian of Biltmore, friend of Braeden, daughter of her Pa, and heroine of the Blue Ridge Mountains and all the folk and creatures that call it home.
Robert Beatty is the author of the #1 New York Times best-selling Serafina series published by Disney Hyperion, a spooky mystery-thriller about a brave and unusual girl who lives secretly in the basement of the grand Biltmore Estate.
Serafina and the Black Cloak was a #1 New York Times best seller, has been on the list for more than 59 weeks, and won the prestigious 2016 Pat Conroy Southern Book Prize. The second book in the series, Serafina and the Twisted Staff, became a #1 New York Times best seller in the first week of its launch and earned a "Starred Review" from Kirkus Reviews, which said, "Even better than its predecessor, a sequel that delivers nonstop thrills from beginning to end." Enjoyed by both young readers and adults, the books are being taught in over a thousand classrooms nationwide. The third book in the Serafina series comes out in July 2017.
Robert Beatty lives in the Blue Ridge Mountains of Asheville, North Carolina with his wife and three daughters, who help create and refine his stories. He loves to explore Biltmore Estate and the darkened forest trails where his novels take place. He writes full-time now, but in his past lives, Robert was one of the early pioneers of cloud computing, the founder/CEO of Plex Systems, the co-founder of Beatty Robotics, and the chairman/CTO of Narrative Magazine. In 2007, he was named an Entrepreneur of the Year. When asked about the inspiration for his books, Robert said, "Serafina's journey grew out of my desire to write a story about an unusual and heroic young girl for my three daughters."

*"Beatty continues to build a fascinating magical world, the Blue Ridge Mountains and Biltmore Estate developing beyond mere settings into characters themselves. Each place reveals history and clues to Serafina's life and those of other gifted, mysterious beings. Even better than its predecessor, a sequel that delivers nonstop thrills from beginning to end."—Kirkus Reviews