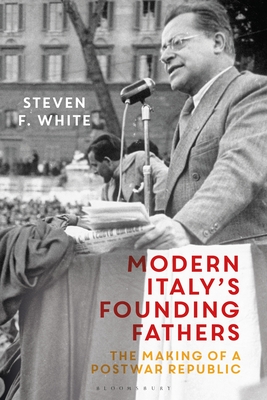 Modern Italy's Founding Fathers offers a fresh perspective on the genesis of the Italian republic as viewed through the efforts of its three most influential leaders: Christian Democrat Alcide De Gasperi, Socialist Pietro Nenni and Communist Palmiro Togliatti. In concise, accessible prose, this work demonstrates how De Gasperi - the Republic's inaugural prime minister from 1945 to 1953 - and his fellow statesmen's shared experience of Fascist oppression, belief in popular sovereignty, and ability to compromise despite deep ideological differences, enabled the creation of Italy's post-war republic.

This path-breaking collective biography traces the genesis of the Italian republic, commencing with the overthrow of Mussolini in 1943 and concluding with the death of De Gasperi in 1954. Drawing on the speeches, writings and personal papers of the three protagonists, on Italian and U.S. archives, on contemporary memoirs and on secondary scholarship, Steven F. White demonstrates how these leaders forged political practices and customs which continue to define Italian parliamentary life to the present day. Examining the interplay of personalities, leadership styles, ideas and political context, this study is a vital text for any student of modern Italy and, more broadly, of Cold War Europe.
Steven F. White is an independent historian. The recipient of two Fulbright awards and a research fellowship at European University Institute, he has taught at the University of Virginia, Averett University, the University of Perugia, Mount St. Mary's University and the U.S. State Department's Foreign Service Institute. He has published widely on modern Italian history, including Progressive Renaissance: America and the Reconstruction of Italian Education, 1943-1962 (1991).