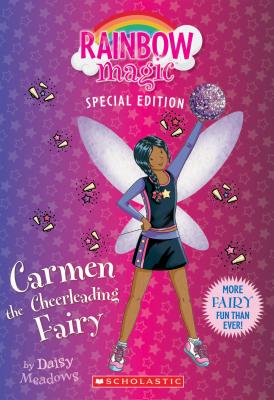 
Difficult to Find
Kirsty has joined a junior cheerleading squad and is headed to her first big competition in nearby Cove City! Rachel is coming along for the weekend to support her friend -- and cheer her on from the sidelines.

The girls are excited, but the competition is stiff, and things are about to take a magical turn that no one expects . . . Wicked Jack Frost has stolen Carmen's three magic objects: a pompom, a hair bow, and a megaphone. He's sick and tired of all this cheer, and he's determined to take the prestigious competition trophy and make it the centerpiece of his new trophy case at the Ice Castle!

If Carmen doesn't find her magic objects soon, the cheerleading competition will be a complete disaster -- and so will cheerleading everywhere! Rachel and Kirsty can't let that happen. So many girls and boys train really hard at cheerleading, and it's not fair for Jack Frost to ruin it for everyone!

Daisy Meadows has written over one hundred books for children. Her Rainbow Magic series is a New York Times bestseller!