Miss Dior: A Wartime Story of Courage and Couture (Paperback) 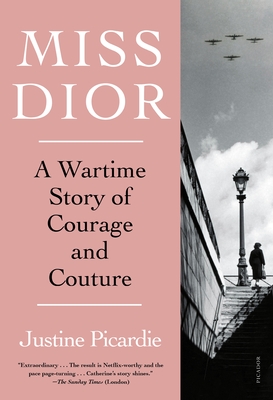 Miss Dior: A Wartime Story of Courage and Couture (Paperback)

The overdue restoration of Catherine Dior’s extraordinary life, from her brother’s muse to Holocaust survivor

Miss Dior is a story of freedom and fascism, beauty and betrayal, roses and repression, and of how the polished surface of fashion conceals hidden depths.

It paints a portrait of the enigmatic woman behind the designer Christian Dior: his beloved younger sister Catherine, who inspired his most famous perfume and shaped his vision of femininity. Justine Picardie’s journey takes her to Occupied Paris, where Christian honed his couture skills while Catherine dedicated herself to the French Resistance, until she was captured by the Gestapo and deported to the German concentration camp of Ravensbrück.

With unparalleled access to the Dior family homes and archives, Picardie shines a new light on Catherine’s courageous life and Christian Dior’s legendary work, and reveals how his enchanting “New Look” emerged out of the shadows of his sister’s suffering.

Tracing the wartime paths of the Dior siblings leads Picardie deep into other hidden histories, and different forms of resistance and sisterhood. She explores what it means to believe in beauty and hope, despite our knowledge of darkness and despair, and discovers the timeless solace of the natural world in the aftermath of devastation and destruction. The result is an exquisite and unforgettably moving book.

Justine Picardie is the author of six books, including her critically acclaimed memoir, If the Spirit Moves You: Life and Love After Death, and the international bestseller Coco Chanel: The Legend and the Life. She is a contributing editor to Harper’s Bazaar UK, having previously been its editor-in-chief. She was formerly an investigative journalist for The Sunday Times, a columnist for The Telegraph, editor of the Observer Magazine, and features director of Vogue.

"Picardie has written a moving and impressive history of wartime politics, death camps, postwar trials, collaboration and the invigorating world of haute couture. She gets much of her Ravensbrück material from victims who left records of their experiences and made small, heartbreaking drawings and gifts to keep their spirits up. Miss Dior is a tricky book to pull off but Ms. Picardie is a sensitive, elegant writer and—hard as it is to imagine—for the most part she succeeds." —Moira Hodgson, The Wall Street Journal

"Picardie . . . has nearly unassailable fashion knowledge. She reconstructs with ease and confidence how fashion restored luxury to its French perch after the war." —Ruth Peltason, Air Mail

“Extraordinary . . . The result is Netflix-worthy and the pace page-turning as Picardie presents a woman who appeals beyond the boundaries of Planet Fashion . . . Catherine’s story . . . shines—the quiet Dior who preferred flowers to fashion, the unsung heroine who survived the abuse of the Third Reich to help liberate France.” —Jackie Annesley, The Sunday Times (UK)

“The juxtaposition of terrible shadows and dazzling light is one of the great strengths of this book . . . [Miss Dior] is a very personal, very passionate book.” —Artemis Cooper, Times Literary Supplement

“Picardie’s book is of the moment . . . celebrating an unsung hero.” —Laird Borrelli-Persson, Vogue

“Picardie’s research is remarkable, her writing grabs and holds the reader tight from beginning to end . . . An exceptional discussion on France during WWII and the couture industry, [Miss Dior] is fascinating reading and will not disappoint.” —Judith Reveal, New York Journal of Books

“Picardie taps Resistance archives and memoirs by Catherine's fellow resistants and unearths a wealth of archival photos in order to piece together her subject's experience. Catherine . . . represents exquisite grace under fire. Miss Dior is an effulgent ode to the woman and her French Resistance compatriots.” —Shelf Awareness

"Picardie interweaves a sensitive narrative of her search for Catherine as she follows the 'echoing footfall of a disappearing girl.' A well-informed rendering of dramatic times." —Kirkus Reviews

“As subtle as it is fragrant, Justine Picardie’s book casts a strong spell that lingers.” —Benjamin Taylor, author of Here We Are and The Hue and Cry at Our House

“Miss Dior portrays a woman who has too long stood hidden in the shadow of her famous brother, Christian. While full of import for them both, Catherine Dior’s kinship with the great fashion designer may well have been her least noteworthy trait. A fighter in the French Resistance, a survivor of the Ravensbrück death camp, and a creator of the rose gardens that inspired the fragrance Miss Dior, she is an inspiring, unforgettable figure, worthy of Picardie’s inspiring, unforgettable prose. ” —Caroline Weber, author of Proust’s Duchess and Queen of Fashion