A Mystery of Mysteries: The Death and Life of Edgar Allan Poe (Hardcover) 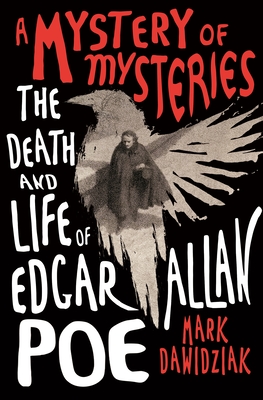 A Mystery of Mysteries: The Death and Life of Edgar Allan Poe (Hardcover)

A Mystery of Mysteries is a brilliant biography of Edgar Allan Poe that examines the renowned author’s life through the prism of his mysterious death and its many possible causes.

It is a moment shrouded in horror and mystery. Edgar Allan Poe died on October 7, 1849, at just forty, in a painful, utterly bizarre manner that would not have been out of place in one of his own tales of terror. What was the cause of his untimely death, and what happened to him during the three missing days before he was found, delirious and “in great distress” on the streets of Baltimore, wearing ill-fitting clothes that were not his own?

Mystery and horror. Poe, who remains one of the most iconic of American writers, died under haunting circumstances that reflect the two literary genres he took to new heights. Over the years, there has been a staggering amount of speculation about the cause of death, from rabies and syphilis to suicide, alcoholism, and even murder. But many of these theories are formed on the basis of the caricature we have come to associate with Poe: the gloomy-eyed grandfather of Goth, hunched over a writing desk with a raven perched on one shoulder, drunkenly scribbling his chilling masterpieces. By debunking the myths of how he lived, we come closer to understanding the real Poe—and uncovering the truth behind his mysterious death, as a new theory emerges that could prove the cause of Poe’s death was haunting him all his life.

In a compelling dual-timeline narrative alternating between Poe’s increasingly desperate last months and his brief but impactful life, Mark Dawidziak sheds new light on the enigmatic master of macabre.

Mark Dawidziak is the author or editor of about 25 books, including three studies of landmark television series: The Columbo Phile: A Casebook, The Night Stalker Companion and Everything I Need to Know I Learned in The Twilight Zone, his lighthearted 2017 tribute to Rod Serling’s classic anthology series. He also is an internationally recognized Mark Twain scholar, and five of his books are about the iconic American writer. He spent 43 years as a television, film and theater critic at such newspapers as the Akron Beacon Journal and the Cleveland Plain Dealer. His work on the horror side of the street also includes the novel Grave Secrets, The Bedside, Bathtub & Armchair Companion to Dracula, short stories, and comic book scripts. He lives in Ohio.

“Excellent…Dawidziak’s biography reaches beyond the myth of Poe to reveal the actual man and writer, all while painting a vivid picture of the era in which he lived.” –Bookpage (starred)

“In this intrigue-filled offering, Dawidziak achieves the difficult feat of delivering a fresh biography of Edgar Allan Poe…this has revelations to spare.” –Publishers Weekly (starred)

“A brisk, satisfying biography of a literary icon who still fascinates.” –Kirkus Reviews

“A Mystery of Mysteries will surely fascinate even the mildly-curious Edgar Allan Poe fan…a poignant analysis.” –The Week, “8 must-read books in 2023”

“Even those familiar with Poe's story will find plenty of surprises here, while those who know him only by reputation will get a better-rounded view of a man who was far more than an author of a few scary stories.” –The Columbus Dispatch

“Edgar Allan Poe has brooded over the world’s comprehension as the dark prince of horror tales: a hollow-eyed specter surrounded by candle-tossed shadows, a raven on his writing table, an empty cognac glass at his elbow. In this revelatory biography, Mark Dawidziak honors the Gothic nature of Poe’s work, yet sweeps open the curtains to throw full light upon this masterful poet and shaper of American literature.” –Ron Powers, Pulitzer Prize-winning author of Flags of Our Fathers and Mark Twain: A Life

“A poignant and realistic picture of Poe through the fascinating black prism of his mysterious death.” --J.W. Ocker, Edgar Award-winning author of Poe-Land

“Mark Dawidziak plumbs the mysteries of Poe’s life and career with extraordinary skill and knowledge. Much like Montresor leading Fortunato through the winding catacombs, he leaves the reader surprised and thoroughly ensnared.” –Daniel Stashower, Edgar Award-winning author of The Hour of Peril and The Beautiful Cigar Girl: Mary Rogers, Edgar Allan Poe, and the Invention of Murder