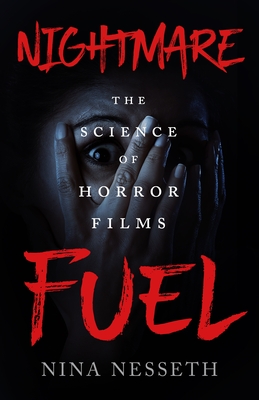 Nightmare Fuel by Nina Nesseth is a pop-science look at fear, how and why horror films get under our skin, and why we keep coming back for more.

Do you like scary movies?
Have you ever wondered why?

Nina Nesseth knows what scares you. She also knows why.

In Nightmare Fuel, Nesseth explores the strange and often unexpected science of fear through the lenses of psychology and physiology. How do horror films get under our skin? What about them keeps us up at night, even days later? And why do we keep coming back for more?

Horror films promise an experience: fear. From monsters that hide in plain sight to tension-building scores, every aspect of a horror film is crafted to make your skin crawl. But how exactly do filmmakers pull this off? The truth is, there’s more to it than just loud noises and creepy images.

With the affection of a true horror fan and the critical analysis of a scientist, Nesseth explains how audiences engage horror with both their brains and bodies, and teases apart the elements that make horror films tick. Nightmare Fuel covers everything from jump scares to creature features, serial killers to the undead, and the fears that stick around to those that fade over time.

With in-depth discussions and spotlight features of some of horror’s most popular films—from classics like The Exorcist to modern hits like Hereditary—and interviews with directors, film editors, composers, and horror academics, Nightmare Fuel is a deep dive into the science of fear, a celebration of the genre, and a survival guide for going to bed after the credits roll.

“An invaluable resource, a history of the horror genre, a love letter to the scary movie—it belongs on any horror reader’s bookshelf.” —Lisa Kröger, Bram Stoker Award-winning author of Monster, She Wrote

NINA NESSETH is a science communicator and writer based in Sudbury, Ontario. She is the co-author of The Science of Orphan Black (ECW Press, 2017). Her writing can be found across the web, usually digging deeply into the intersection between horror and science. Nightmare Fuel: The Science of Horror Films is her solo debut.

“A must-read for any serious horror fan, Nightmare Fuel is a smart look at not only what scares us, but why it scares us. Nesseth masterfully dissects the horror genre in an immensely readable fashion.” —Lisa Kröger, Bram Stoker Award-winning author of Monster, She Wrote

“Perfect for horror buffs and dabblers alike.... Nesseth covers everything from social history to sound design to cognitive neuroscience, and does it with a confident hand and an ever-present love for the macabre.” —Caitlin Starling, bestselling author of The Death of Jane Lawrence

“If you've ever wondered why horror movies are scary and how, precisely, they affect our brains and bodies, then Nightmare Fuel is for you. Nesseth breaks down scientific research related to horror and the effects of fear in accessible prose. A fascinating read for both casual and committed fans of horror media.” —Melanie R. Anderson, co-author of Monster, She Wrote

“Whether you’re here for the science, the psychology, or just a touch of blood magic that makes for Nightmare Fuel, Nesseth delivers. An intriguing consideration of terror and its mechanics. Highly recommended.” —Angela Slatter, award-winning author of All the Murmuring Bones

“This is an enlightening—and fun—look at what goes on when one’s blood runs cold.” —Publishers Weekly

“In Nightmare Fuel, Nesseth picks apart the stitching from the unquiet corpses of our fears to better shine a light on each dismembered limb, taking their measurements and puzzling out the how and why they spring so eagerly to life in the dark night of our imaginations.” —Jordan Shiveley author of Hot Singles In Your Area

“Nesseth combines savvy science writing with a deep love of horror movies, resulting in something both scholarly and eminently readable. Even horror aficionados may stumble across an unfamiliar title she cites.” —Library Journal

“Educational, thought-provoking, and just plain fun....Readers who love horror, regardless of format, will eagerly seek out this title, but it is also a great suggestion for fans of Mary Roach or Grady Hendrix’s Paperbacks from Hell (2017).” —Booklist

“As compelling as it is instructive, Nightmare Fuel is a unique and vital addition to the bookcase of any genre film lover. Nesseth expertly guides readers through the dim and tangled corridors of the human brain in an accessible and engaging journey.... I couldn’t put it down.” —Valeska Griffiths, founder of anatomyofascream.com & co-editor of Scared Sacred: Idolatry, Religion and Worship in the Horror Film

“Like a lab coat-clad wizard with the most factually potent of powers, Nesseth pulls back the dark velvet curtain separating the science from the scares. Expertly researched and beautifully written, Nightmare Fuel is an absolute must-read.” —Rachel Reeves, Horror Journalist