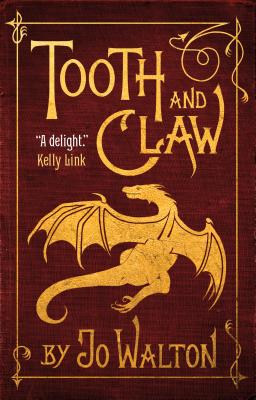 Now in a new pocket-sized hardcover edition, the World Fantasy Award-winning tale of contention over love and money—among dragons.

Jo Walton burst onto the fantasy scene with The King's Peace, acclaimed by writers as diverse as Poul Anderson, Robin Hobb, and Ken MacLeod. In 2002, she was voted the John W. Campbell Award for Best New Writer.

Now Walton returns with a very different kind of fantasy story: the tale of a family dealing with the death of their father, of a son who goes to law for his inheritance, a son who agonizes over his father's deathbed confession, a daughter who falls in love, a daughter who becomes involved in the abolition movement, and a daughter sacrificing herself for her husband.

Except that everyone in the story is a dragon, red in tooth and claw.

Here is a world of politics and train stations, of churchmen and family retainers, of courtship and country houses...in which, on the death of an elder, family members gather to eat the body of the deceased. In which society's high-and-mighty members avail themselves of the privilege of killing and eating the weaker children, which they do with ceremony and relish, growing stronger thereby.

You have never read a novel like Tooth and Claw.

JO WALTON won the Hugo and Nebula Awards for her novel Among Others and the Tiptree Award for her novel My Real Children. Before that, she won the John W. Campbell Award for Best New Writer, and her novel Tooth and Claw won the World Fantasy Award. The novels of her Small Change sequence—Farthing, Ha'penny, and Half a Crown—have won acclaim ranging from national newspapers to the Romantic Times Critics' Choice Award. A native of Wales, she lives in Montreal.

“Utterly sui generis…It's a rare book that leaves me wishing it were twice as long, but Tooth and Claw is one such.” —The Magazine of Fantasy and Science Fiction

“A delight. On a basic level, Tooth and Claw works much the same way that Watership Down worked…Highly recommended for anyone who loved the books of Austen, or Heyer (or Laurie Colwin's more contemporary novels, for that matter), and wishes that someone was still writing social comedies that were just as sharp and just as pleasurable.” —Kelly Link, author of Stranger Things Happen

“The Pride and Prejudice of the dragon world... I love this sly, witty, fast-paced, brilliant little book.” —Jane Yolen

“Plot strands come together just as they should, with delightful triumphs, resolutions, revelations, and come-uppances.” —Locus