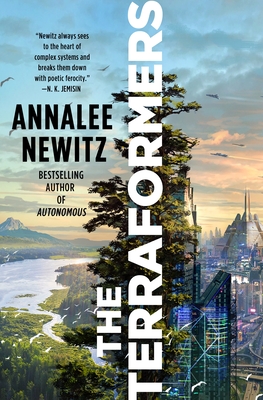 From science fiction visionary Annalee Newitz comes The Terraformers, a sweeping, uplifting, and illuminating exploration of the future.

Destry's life is dedicated to terraforming Sask-E. As part of the Environmental Rescue Team, she cares for the planet and its burgeoning eco-systems as her parents and their parents did before her.

But the bright, clean future they're building comes under threat when Destry discovers a city full of people that shouldn’t exist, hidden inside a massive volcano.

As she uncovers more about their past, Destry begins to question the mission she's devoted her life to, and must make a choice that will reverberate through Sask-E's future for generations to come.

A science fiction epic for our times and a love letter to our future, The Terraformers will take you on a journey spanning thousands of years and exploring the triumphs, strife, and hope that find us wherever we make our home.

Also by Annalee Newitz
Autonomous
The Future of Another Timeline

ANNALEE NEWITZ is an American journalist, editor, and author of fiction and nonfiction. They are the recipient of a Knight Science Journalism Fellowship from MIT, and have written for Popular Science, The New Yorker, and the Washington Post. They founded the science fiction website io9 and served as Editor-in-Chief from 2008–2015, and then became Editor-in-Chief at Gizmodo and Tech Culture Editor at Ars Technica. Their book Scatter, Adapt, and Remember: How Humans Will Survive a Mass Extinction was nominated for the LA Times Book Prize in science. Their first novel, Autonomous, won a Lambda award.

"The Terraformers is so engaging, you could almost miss the pyrotechnic world-building and bone-deep intelligence. Newitz continues doing some of the best work in the field."—James S. A. Corey, author of the Expanse series

"Fascinating and readable in equal measure, The Terraformers will remake your mind like its cast remakes an entire planet."—John Scalzi, author of The Collapsing Empire

"The reader of Annalee Newitz’s third novel, The Terraformers, will surely walk away stunned and bedazzled . . . this generously overstuffed tale has enough ideas and incidents to populate half a dozen lesser science fiction books. But the reading experience is never clotted or tedious, never plagued by extraneous detours . . . [Newitz has] gifted us a vibrant, quirky vision of endless potential earned by heroism, love and wit."—The Washington Post

"With an intriguing mixture of AI, intelligent animals, cyborgs, and humans, Newitz depicts a complex but hopeful future where environmental consciousness and people’s rights take precedence.”—Buzzfeed

"Newitz performs a staggering feat of revolutionary imagination in this hopeful space-opera. . . . With the ethos of Becky Chambers and the gonzo imagination of Samuel R. Delany, plus a strong scientific basis in ecology and urban planning, this feels like a new frontier in science fiction."—Publishers Weekly, STARRED review

“Newitz always sees to the heart of complex systems and breaks them down with poetic ferocity.”—N. K. Jemisin, author of the Broken Earth trilogy and The City We Became

"[Featuring] an appealingly diverse cast of rangers, scientists, engineers and an utterly endearing autonomous collective of sentient flying trains... The Terraformers, refreshingly, is the opposite of the dystopian, we’re-all-doomed chiller that’s become so common in climate fiction. Newitz’s mordant sense of humor steers the story clear of starry-eyed optimism, but it’s easy to imagine future generations studying this novel as a primer for how to embrace solutions to the challenges we all face."—Scientific American

“A complete refurbishment of the great galactic story of terraformers. The old pleasures of the planetary romance are reanimated in kaleidoscopic fashion. Startling fun!”—Kim Stanley Robinson, author of The Ministry for the Future

"Newitz’s latest is far-reaching and ambitious but also surprisingly cozy and warm. . . . Newitz has a true gift for exploring the tweaks, movements, and decisions that keep history moving forward centuries ahead, and for digging into weighty issues while maintaining light humor, a delightful queer sensibility, and pure moments of joy."—Booklist, STARRED review

"An epic geo-engineering thought experiment on the scale of Kim Stanley Robinson’s Mars trilogy, and a refreshingly hopeful vision of humanity’s fate among the stars.”—Polygon

“The Terraformers by Annalee Newitz is undoubtedly destined to become a classic of the hopepunk movement . . . It takes genuine faith in the future to write science fiction like this, to ask the big questions and offer so many wild and wondrous answers. If you’ve been looking for an antidote to the apocalypse, this novel is for you."—San Francisco Chronicle

“Annalee Newitz’s ability to combine the wild west and the final frontier with plate tectonics and post humanism while spinning an epic tale that never loses sight of its characters is nothing short of magical. After reading The Terraformers you will want to live in Annalee Newitz’s future.”—Javier Grillo-Marxuach, creator of The Middleman and producer on Lost and The Dark Crystal: Age of Resistance

“Through a series of linked stories, Newitz crafts a unique cli-fi that centers land sovereignty and the dangers of capitalism, brought to life by their signature talent for weaving plausible science in with the tackling of big moral questions.”—Tor.com

"Warm, imaginative and often funny, Annalee Newitz’s The Terraformers thoughtfully examines corporate colonialism and humanity’s ever-present need to expand . . . and Newitz giddily explores the convergence of digital and ecological systems with infectious enthusiasm. The Terraformers is full of parallels to contemporary issues, and while Newitz intensely examines these topics, the reader will never feel lectured at, bored or disconnected from the characters."—BookPage

"While the novel entices with its brilliant and varied cast of human and nonhuman characters (I was particularly taken by Rocket the drone, Scrubjoy the train, and those moose), it also offers a serious and hopeful template that’s a lot closer to home than all those distant light-years and centuries might at first suggest."—Locus Magazine

“An ingenious, galaxy-brain book . . . plate tectonics, river flow and transit all play central roles in the book’s plot, and each is handled with intelligence and often a delightful weirdness.”—Los Angeles Times