Deogratias: A Tale of Rwanda (Hardcover) 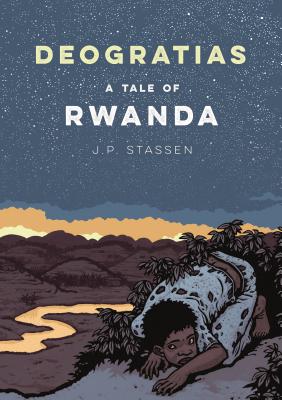 Deogratias: A Tale of Rwanda (Hardcover)

The 2000 winner of the Goscinny Prize for outstanding graphic novel script, this is the harrowing tale of the Tutsi genocide in Rwanda, as seen through the eyes of a boy named Deogratias.

He is an ordinary teenager, in love with a girl named Bénigne, but Deogratias is a Hutu and Bénigne is a Tutsi who dies in the genocide, and Deogratias himself plays a part in her death. As the story circles around but never depicts the terror and brutality of an entire country descending into violence, we watch Deogratias in his pursuit of Bénigne, and we see his grief and descent into madness following her death, as he comes to believe he is a dog.

Told with great artistry and intelligence, this book offers a window into a dark chapter of recent human history and exposes the West's role in the tragedy. Stassen's interweaving of the aftermath of the genocide and the events leading up to it heightens the impact of the horror, giving powerful expression to the unspeakable, indescribable experience of ordinary Hutus caught up in the violence. Difficult, beautiful, honest, and heartbreaking, this is a major work by a masterful artist.

J.P. Stassen was born and raised in Belgium. His books have been published in multiple languages, and his remarkable artistry has won him many awards. Some of his works are imbued with the places he lived, such as the Goscinny winner Deogratias, and Tangiers in The Old Frenchman's Bar. After living in various places including Latin America, Mozambique, and Rwanda, he settled in Paris, where he lives today.

“While Stassen's simple layout and spare images may appear static at first, the uncluttered art, reminiscent of jewel-toned woodcuts, serves to underscore the erupting brutality... the importance of the story and the heartbreaking beauty of its presentation make it an essential purchase. (Graphic novel. YA)” —Kirkus, starred review

" The lucid, sometimes-painful imagery—depicted in intense colors, with highly expressive faces—accompanying this story illustrates the ways in which the hierarchies besetting race and ethnicity, imposed by the sociopolitical climate, all come to bear on the decisions made by the characters...A graphic novel of regret riddled with inescapable grief, capturing attention from the outset, with a stinging and near-to-cathartic ending." —Kirkus

“...this book vividly shows the power of fiction to introduce fact.” —Booklist

“ Stassen is a journalist who lives in Rwanda, and his art is bold and clear, using different color palettes to seamlessly shift between before and after. There is no catharsis, only the realization that even justice turns its champion into a monster.
” —Publishers Weekly

“ This graphic novel's worldview is bleak: Deogratias is a tale with no heroes. The full-color art can be both brutal and beautiful, and is extremely effective. ” —George Galuschak, YA Libn., Montvale PL, Montvale, NJ, KLIATT

“ The natural world is turned upside down in this book, the subject matter brutal. Deogratias is worth a look, especially for readers who wonder about the literary value of graphic novels.” —Michigan Reading Journal