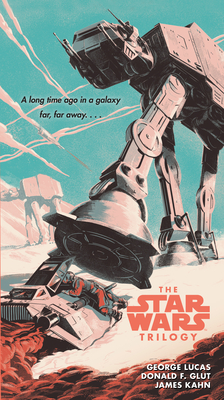 By George Lucas, Donald Glut, James Kahn
List Price: $9.99
Our Price: $8.99
(Save: $1.00 10%)
Usually Ships in 1-5 Days
A special anniversary collector’s edition featuring the novels of all three classic films—Star Wars: A New Hope, Star Wars: The Empire Strikes Back, and Star Wars: Return of the Jedi

Forty years after the phenomenon was born, Star Wars remains one of the greatest science fantasy sagas ever told. Read these stories and rediscover the wonder of the epic that begins:

Star Wars Trilogy is a must-read for anyone who wants to relive the excitement, the magic, and the sheer entertainment of this legendary saga—now and forever.
George Lucas’s devotion to timeless storytelling and cutting-edge innovation has resulted in some of the most successful and beloved films of all time, including the Star Wars saga and the Indiana Jones franchise. He has pioneered new digital standards for sophistication in film visuals and sound, and inspired generations of young people to follow their dreams.