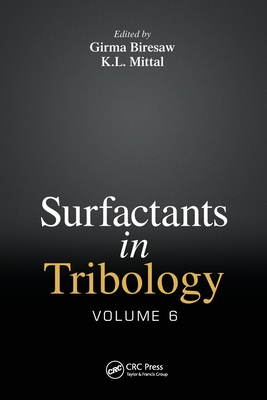 Surfactants play a critical role in Tribology controlling friction, wear, and lubricant properties such as emulsification, demulsification, bioresistance, oxidation resistance, rust prevention and corrosion resistance. This is a critical topic for new materials and devices particularly those built at the nanoscale. This newest volume will address important advances, methods, and the use of novel materials to reduce friction and wear. Scientists from industrial research and development (R&D) organizations and academic research teams in Asia, Europe, the Middle East and North America will participate in the work.

Girma Biresaw received a Ph.D. in Physical-Organic Chemistry from the University of California, Davis. As a Postdoctoral Research Fellow at the University of California, Santa Barbara, he investigated reaction kinetics and products in surfactant-based organized assemblies for four years. As a scientist at the Aluminum Company of America (Alcoa), he conducted research in tribology, surface/colloid science, and adhesion for 12 years. Girma is currently a Research Chemist / Lead Scientist at the Agricultural Research Service (ARS) of the US Department of Agriculture in Peoria, IL, where he is conducting research in tribology, adhesion, and surface/colloid science in support of programs aimed at developing biobased products from farm-based raw materials. Girma has authored/co-authored more than 300 scientific publications, including more than 85 peer-reviewed manuscripts, 6 patents and 7 edited books. Girma is a Fellow of the STLE and an Editorial Board Member for the Journal of Biobased Materials and Bioenergy. K. L. Mittal received his PhD from the University of Southern California in 1970 and was associated with IBM Corp. from 1972 to 1994. He is currently teaching and consulting worldwide in the areas of adhesion and surface cleaning. He is the editor of 122 published books, as well as others that are in the process of publication, within the realms of surface and colloid science and of adhesion. He has received many awards and honors and is listed in many biographical reference works. Dr. Mittal was a founding editor of the Journal of Adhesion Science and Technology and was its Editor-in-Chief until April 2012. He has served on the editorial boards of a number of scientific and technical journals. He was recognized for his contributions and accomplishments by the international adhesion community that organized the First International Congress on Adhesion Science and Technology in Amsterdam in 1995 on the occasion of his 50th birthday (235 papers from 38 countries were presented). In 2002, he was honored by the global surfactant community, which instituted the Kash Mittal Award in the surfactant field in his honor. In 2003 he was honored by the Maria Curie-Sklodowska University, Lublin, Poland, which awarded him the title of doctor honoris causa. In 2010 he was honored by both adhesion and surfactant communities on the occasion of publication of his 100th edited book. In 2012, he initiated a new journal titled Reviews of Adhesion and Adhesives.