Atheism Kills: The Dangers of a World Without God – and Cause for Hope (Paperback) 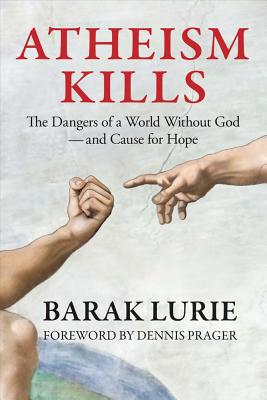 Atheism Kills: The Dangers of a World Without God – and Cause for Hope (Paperback)


Usually Ships in 1-5 Days
In "Atheism Kills," Barak Lurie exposes the horrors of a world without God. Contrary to the mantra we’ve heard time and time again that religion is responsible for more deaths than anything else, it is in fact the absence of God which has killed—in obscene numbers. Ever since atheism first assumed government control in the French Revolution, it has done nothing but kill.

Atheism has killed through its many deputies: progressivism, eugenics, fascism, and communism. Lurie shows that it was the godlessness in each of these ideologies that killed hundreds of millions.

But atheism doesn’t just kill lives. It kills purpose, free will, beauty, compassion, a sense of the past and future, creativity, and freedom itself. Atheism offers only the horrors of chaos and totalitarianism.

The world misplaces its focus on Radical Islam as the greatest threat to civilization. As horrible as it is, it is doing nothing and having no sense of self which are the true enemies. It was our will to fight and sense of mission that overcame fascism and communism. We must have these to keep Radical Islam at bay, too.

This is why we must resist the growth of atheism. It was God that gave us our freedom. It was God who gave our sense of purpose that created civilization. Take those away, and there is nothing to fight for. In this way, Lurie shows that the lack of belief in God is our greatest danger. How does he know? Because like a hurricane, godlessness has only known how to destroy everything in its path. It has never created.

That preparation can only come with our embrace of the centrality of God.
Barak Lurie is a managing partner of the firm Lurie & Seltzer in Los Angeles, California. Barak obtained his BA with honors at Stanford University in 1985, and his JD and MBA at the UCLA School of Law and Anderson School of Business in 1989. He is the host of The Barak Lurie Show, a popular and riveting radio program heard Sunday mornings on AM870, KRLA in Los Angeles. He was born in Israel and serves on many pro-Christian and pro-Israel boards. Barak is a former atheist who turned to God after using logic, science, and probabilities. Barak pulls no punches as he makes the case for the existence of God—and shows the dangers of atheism. He beats down atheists with a club of reason, history, and science, and exposes atheists’ flawed assumptions. Barak’s many articles, podcasts, and speeches on atheism and its dangers have made him a declared and decorated champion of Christianity and Judaism, and their crucial roles in all the values we hold dear in Western civilization. Barak is a lover of God, America, and Israel, and an avid mountain biker and vegan. He and his wife Stacey have three children and live in Brentwood, California.