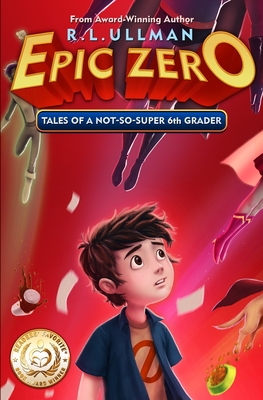 This is book number 1 in the Epic Zero series.

Growing up in a superhero family is cool, unless you're powerless ...
**Gold Medal Winner - Readers' Favorite Book Awards**

All Elliott Harkness wants is to be a superhero. His parents are superheroes. His older sister is a superhero. Heck, even his dog is a superhero. But Elliott has a problem--he's a "Zero"--which is super-speak for powerless So, while his family is off fighting crime, Elliott is stuck muddling through middle school. Elliott feels ever-so-ordinary, until a mysterious girl changes everything. For some reason, she believes Elliott is the only one who can capture a mega-powerful, extraterrestrial orb before it falls into the wrong hands. But with menacing supervillains and globe-conquering aliens closing in fast, will Elliott find the power to be the epic hero he's always wanted to be--or will he always be just an Epic Zero? Epic Zero is the first book in a hilarious, action-packed series that will entertain middle grade students, reluctant readers, and adults. Epic Zero includes 16 illustrated character profiles and a full glossary of superpowers. **Over 2,000 five-star series reviews on Amazon and Goodreads.** What readers are saying: "Truly laugh out loud funny." "My kids and I could not put this book down " "From beginning to end it had me guessing." "You'll be rooting for the hero from page one." "Extremely entertaining. Ullman has created a richly detailed world." "The next Diary of a Wimpy Kid or Diary of a 6th Grade Ninja series." "Holy moly, Batman Move over This book is a winner." Click "Buy Now" to read today