Whom Shall I Fear?: Pushing the Politics of Change (Paperback) 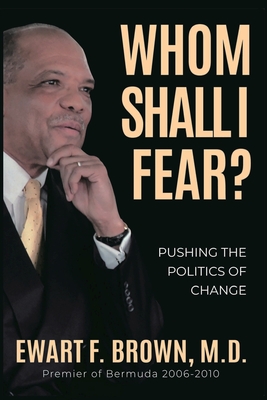 Whom Shall I Fear?: Pushing the Politics of Change (Paperback)

Outspoken, accomplished, and frequently controversial, Bermudian physician and political leader Ewart Brown, MD, has been a longtime champion of racial equality, human rights, and economic and social justice. In this event-filled memoir, he shares the experiences that most shaped him and that defined his often tumultuous time in office.

Brown's journey began with a childhood in a politically engaged family in a Bermuda then still legally segregated. He spent his pivotal high school years in Jamaica, where he excelled in both academics and athletics, then rose to national U.S. media attention as a leader of civil rights-based student activism at Howard University.

Brown practiced as a physician in inner-city Los Angeles in the 1970s and 1980s, while also finding time to become the inaugural medical director of the acclaimed musical festival Reggae Sunsplash.

He entered electoral politics in Bermuda in the 1990s as a member of the Progressive Labour Party (PLP), when opponents dubbed him "Dr. Revenge," and served as Premier of Bermuda from 2006 to 2010. Today, as an elder statesman of the PLP, he remains a lightning rod for controversy in Bermuda.

Subject to unprecedented assaults by Bermuda's White establishment, Brown justified his signature campaign slogan, "Doc delivers," by working tirelessly to redress longstanding inequalities on behalf of all Bermudians. In Whom Shall I Fear? he recounts how he brought hard-won progress to Bermuda in infrastructure, which he transformed with a system of fast ferries; employment, where he helped Black and White Bermudians overcome the traditional disadvantages they suffered compared to expatriate workers from abroad; and social services, where he launched FutureCare, the country's first comprehensive health insurance program for senior citizens. Brown explains how he stewarded the island's major economic sectors through the Great Recession and fought for human rights and racial equality in the face of intense push-back from racist forces of entrenched financial and political power.

Whom Shall I Fear? tells a story rich in human and political insight that will fascinate readers interested in the global African diaspora and its continuing quest for racial justice and equality.