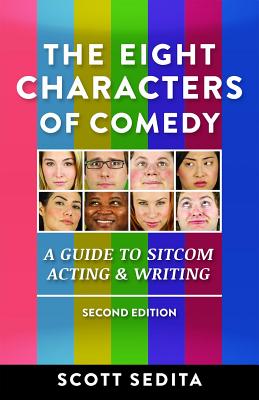 By Scott Sedita
List Price: $24.95
Our Price: $22.46
(Save: $2.50 10%)
Usually Ships in 1-5 Days
The Eight Characters of Comedy is the How-To guide for actors and writers who want to break into the world of sitcoms. It has become a staple in acting classes, writers' rooms, casting offices and production sets around the world. Now, in it's exciting SECOND EDITION, renowned acting coach and bestselling author Scott Sedita gives you even MORE advice and exercises for breaking down comedy scripts, writing jokes and delivering them with comedic precision. Plus, you'll find in-depth sections on Sitcom History, The Three Pillars of Comedy, Auditioning for Sitcoms, and his acclaimed comedic technique The Sedita Method

Most importantly, you will be introduced to his famous sitcom character archetypes, which will help you build your niche in half-hour comedy...The Eight Characters of Comedy

Who is normally cast as The Logical Smart One? Why do we love The Lovable Loser? Why is The Neurotic a favorite for actors and writers? How do you play The Dumb One smart? Who are the biggest Bitch/Bastards? What drives The Materialistic Ones? Why is The Womanizer/Manizer so popular? How can you realistically write and play someone In Their Own Universe?

The Eight Characters of Comedy answers all these questions and more, with UPDATED EXAMPLES from current and classic sitcoms, and from many of the greatest sitcom characters and actors of all time After reading this book, you WILL be ready to work in the exciting world of situation comedy.