The Reign of Antichrist (Paperback) 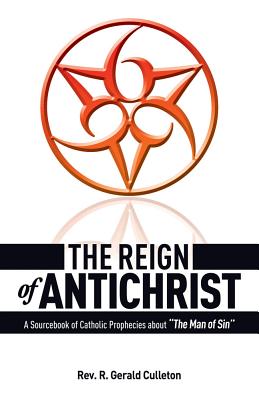 The Reign of Antichrist (Paperback)


Usually Ships in 1-5 Days
Fr. Gerald Culleton's The Reign of Antichrist is probably the best sourcebook of prophecies about the Antichrist that has ever been compiled. Covering both biblical and saintly prophecies, this book gathers into one volume much of the Catholic tradition and prophecy about "The Man of Sin," proving in the process that he will be a single man, that he will rule most of the world and that his reign will last three and one-half years. The following quote from this book illustrates well the scope and caliber of this book: "Antichrist will exceed in malice, perversity, lust, wickedness, impiety, and heartless cruelty and barbarity all men that have ever disgraced human nature. Hence, St. Paul emphatically calls him 'the man of sin, the son of perdition, the wicked one, whose birth and coming is through the operation of Satan, in all manner of seduction of iniquity.' (2 Thessalonians 2). He shall through his great power, deceit and malice succeed in decoying or forcing to his worship two-thirds of mankind; the remaining third part of men will most steadfastly continue true to the faith and worship of Jesus Christ. But in his satanic rage and fury, Antichrist will persecute these brave and devout Christians during three years and a half, and torture them with such an extremity of barbarity, with all the old and his newly invented instruments of pain, as to exceed all past persecutors of the Church combined. He will oblige all his followers to bear impressed upon their foreheads or right hands the mark of the beasts, and will starve to death all those who refuse to receive it." (Apocalypse 3:16; Saint Cyril of Jerusalem, Doctor of the Church). Since many of the citations in this book are cross-referenced by number to those in The Prophets and Our Times-which can actually be considered volume one of two volumes, of which the present book can be considered volume two-it is best to read The Reign of Antichrist with The Prophets and Our Times ready at hand. Moreover, those who dismiss the whole notion that there is a notorious personage called the Antichrist coming to the world will have to revise their thinking after reading Fr. Culleton's highly enlightening book, The Reign of Antichrist.
The Rev. Father R. Gerard Culleton was a priest and author of the twentieth century. His The Reign of Antichrist serves as a definitive sourcebook on the titular topic of the Antichrist, containing many prophesies and covering both biblical and saintly aspects. Father Culleton's work was originally published in 1951 by the Academy Duplicating Service, California. It was also printed by TAN in 1974.