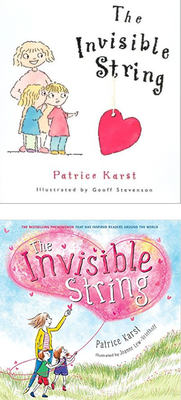 By Patrice Karst, Geoff Stevenson (Illustrator)
List Price: $16.95
Our Price: $15.26
(Save: $1.70 10%)
Usually Ships in 1-5 Days
A steady best-seller and The Invisible String is reaching all over the World WITH OVER 1 MILLION COPIES SOLD, this accessible, bestselling picture book phenomenon about the unbreakable connections between loved ones has healed a generation of readers--children and adults alike. "That's impossible," said twins Jeremy & Liza after their Mom told them they're all connected by this thing called an Invisible String. "What kind of string?" They asked with a puzzled look to which Mom replied, "An Invisible String made of love."

That's where the story begins. A story that teaches of the tie that really binds. Parents and loved ones feel the tug whenever kids give it; and kids feel the tug that comes right back: The Invisible String reaches from heart to heart. Does everybody have an Invisible String? How far does it reach, anyway? Whether there's a loved one far away, or a parent in the next room, this delightful book illustrates a new way to cope with something all children and parents confront sooner or later; a child's fear of loneliness and separation.
The Invisible String has sold over 1 Million copies. In addition to being shared by all ages as a gift for many of life's milestone moments, it is also being used by schools, psychologists, hospices, grief support groups, the military, hospitals, the prison system and multiple organizations worldwide for any kind of loss or separation issues, and gives children a tangible understanding of LOVE.

FROM THE AUTHOR
What began as a way of comforting my own son Elijah when he was sad that I was going to work and he was going to pre-school, became my book The Invisible String. Children of all ages (And yes Adults too ) feel a great sense of peace and joy realizing that we are all connected to the ones that we love... (pets, friends, grandparents, cousins etc... and especially those that have passed on)...through the Invisible String. A string that can never be lost, cut, or torn. A string that can reach all the way to the moon or down to the ocean floor. A string that anger, time, or bad feelings can never make go away. No-one is too young or too old to remember that we are never, really all alone. God Bless you all and never forget about The String.
Bye for now, may your strings soar far and wide... and let's spread the word
Love, Patrice.