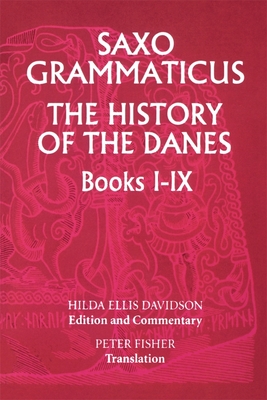 
Usually Ships in 1-5 Days
A major source for the heroic and mythological traditions of northern Europe. ' The translation] is a masterpiece . . . the Commentary] will doubtless prove of the greatest interest to historians.' ENGLISH HISTORICAL REVIEW In the early years of the thirteenth century the Danish writer Saxo Grammaticus provided his people with a History of the Danes, an account of their glorious past from the legendary kings and heroes of Denmark to the historical present. It is one of the major sources for the heroic and mythological traditions of northern Europe, though the complex Latin style and the wide range of material brought together from different sources have limited its use. Here Hilda Ellis Davidson, a specialist in Scandinavian mythology, together with the translator Peter Fisher, provides a full English edition; each of the first nine books is preceded by an introductory summary, and a detailed commentary follows on the folklore and life and customs of twelfth-century Denmark - including the sources of Hamlet, of which Saxo gives the earliest known account. HILDA ELLIS DAVIDSON's other books include The Sword in Anglo-Saxon England; PETER FISHER is also the translator of Olaus Magnus: A Description of the Northern Peoples.