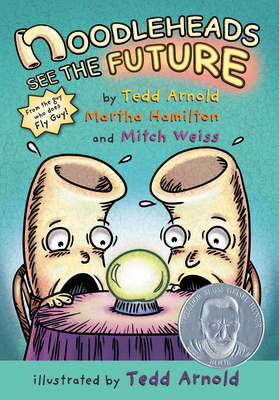 This is book number 2 in the Noodleheads series.

Tedd Arnold—the guy who does Fly Guy—and his storyteller friends are bringing folktale tomfoolery into the 21st Century, with this Geisel Honor-winning companion to Noodlehead Nightmares.

Although Mac and Mac are as hollow-headed as, well, noodles, they're always coming up with brilliant schemes.  For instance, they're absolutely certain Mom will bake them a cake if they gather some firewood for her.  But when their friend Meatball offers to trade them a handful of firewood seeds, the gullible brothers can't foresee what will happen next. . .

Based on traditional world folktales and stories of fools, the Noodleheads also encourage critical thinking, inviting kids to use their noodles– spotting the holes in the brothers' grand plans, and anticipating how things will go awry.

Source notes from professional storytellers Martha Hamilton and Mitch Weiss provide more information about the traditional stories that inspired Mac and Mac's mishaps, showing how these comic motifs feature in folklore and legends all around the world and offering opportunities for further reading.

This easy-to-read series is an accessible introduction to stories of fools, and a great next read for fans of the Fly Guy books.

A Junior Library Guild selection!
Tedd Arnold is the creator of scores of picture books and easy readers. Tedd's first book, No Jumping on the Bed!, became an IRA-CBC Children's Choice book. He is also a two-time winner of the ALA's Theodor Seuss Geisel Honor for Hi! Fly Guy and more recently, I Spy Fly Guy.

Martha Hamilton and Mitch Weiss perform in the U.S. and abroad as Beauty and the Beast Storytellers. They live in New York.

* "Mac and Mac aren't the brightest pieces of pasta in the world, but their hearts are in the right place. . . . Emergent readers will appreciate the simple text, short chapters, and comics-inspired paneled illustrations. Adults will appreciate the authors' note, which goes into some detail about each chapter's folk origins. Two delightfully dense heroes bring folk tales into the 21st century, and young readers are all the richer for it."—Kirkus Reviews, Starred Review

* "The humor is similar to that in the Amelia Bedelia series, and youngsters will laugh knowingly at the noodleheads ridiculous antics as they bumble their way through to a happy conclusion. The author's note explains the worldwide tradition of tales of fools, their use in helping children learn logical thinking, and the specific stories that inspired the noodleheads' adventures. The cartoonish artwork captures the over-the-top feeling of the narrative perfectly. Children will doubtless ask for more titles starring the hapless brothers. . . . A funny and lighthearted addition to early graphic novel and beginning reader collections; fans of all things goofy will devour the noodle heads."—School Library Journal, Starred Review