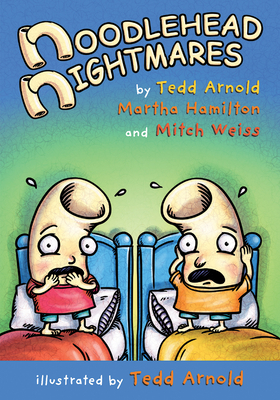 This is book number 1 in the Noodleheads series.

Mac and Mac, who love pie and hate making their beds, are hollow-headed. "See in here? Nothing! Zippo! Nada!" Mac explains.  That’s why they're so easy to fool—and their clever friend Meatball isn't afraid to take advantage of that fact.

Based on traditional world folktales and stories of fools, the Noodleheads also encourage critical thinking, inviting kids to use their noodles—spotting the holes in the brothers' grand plans, and anticipating how things will go awry.

Source notes from professional storytellers Martha Hamilton and Mitch Weiss provide more information about the traditional stories that inspired Mac and Mac's mishaps, showing how these comic motifs feature in folklore and legends all around the world and offering opportunities for further reading.

This easy-to-read series, including the Geisel Honor book Noodleheads See the Future, is an accessible introduction to stories of fools, and a great next read for fans of the Fly Guy books.
Tedd Arnold is the creator of scores of picture books and easy readers, including the award-winning Fly Guy series. His recent book, Vincent Paints His House, earned a starred Kirkus review. He splits his time between Florida and upstate New York.

Martha Hamilton and Mitch Weiss perform in the U.S. and abroad as Beauty & the Beast Storytellers. They live in New York.

"The Noodleheads' goofy schemes and over-the-top reactions to their situations are sure to elicit giggles as the stories unfold in comics-style panels ('I'll eat the pie and you eat the pan,' suggests one of the Macs in the second tale). Arnold employs some of his signature visual flourishes to great effect, including bug-eyed characters and an in-your-face palette. . . . the punchy storytelling and all-around goofiness will entertain emerging readers and graphic novel fans."—Publisher's Weekly


"Anthropomorphic noodles worry and fret over a series of bedtimes and bad dreams. Mac and Mac are two noodleheads, literally: they are noodle-shaped boys with nothing inside their heads. . . . Short chapters with large, brightly hued panels and spacious speech bubbles make this an easy choice for emerging readers. Fans of Arnold's previous work, particularly his Fly Guy series, will recognize his trademark artistic style and gravitate toward this."—Kirkus Reviews


"Like other famous fools, Mac and Mac make decisions that land them in trouble, and when they try to resolve the problem, their unique brand of logic doesn't quite work. . . . This modern take on the foolish folktale is full of goofy humor; great fun for newly independent readers and graphic novel newbies." —School Library Journal