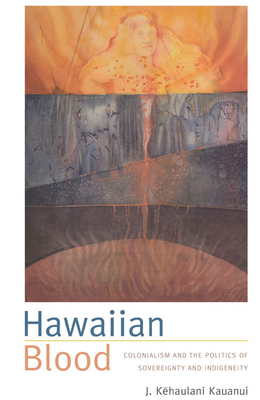 
Usually Ships in 1-5 Days
In the Hawaiian Homes Commission Act (HHCA) of 1921, the U.S. Congress defined "native Hawaiians" as those people "with at least one-half blood quantum of individuals inhabiting the Hawaiian Islands prior to 1778." This "blood logic" has since become an entrenched part of the legal system in Hawai'i. Hawaiian Blood is the first comprehensive history and analysis of this federal law that equates Hawaiian cultural identity with a quantifiable amount of blood. J. Kēhaulani Kauanui explains how blood quantum classification emerged as a way to undermine Native Hawaiian (Kanaka Maoli) sovereignty. Within the framework of the 50-percent rule, intermarriage "dilutes" the number of state-recognized Native Hawaiians. Thus, rather than support Native claims to the Hawaiian islands, blood quantum reduces Hawaiians to a racial minority, reinforcing a system of white racial privilege bound to property ownership.

Kauanui provides an impassioned assessment of how the arbitrary correlation of ancestry and race imposed by the U.S. government on the indigenous people of Hawai'i has had far-reaching legal and cultural effects. With the HHCA, the federal government explicitly limited the number of Hawaiians included in land provisions, and it recast Hawaiians' land claims in terms of colonial welfare rather than collective entitlement. Moreover, the exclusionary logic of blood quantum has profoundly affected cultural definitions of indigeneity by undermining more inclusive Kanaka Maoli notions of kinship and belonging. Kauanui also addresses the ongoing significance of the 50-percent rule: Its criteria underlie recent court decisions that have subverted the Hawaiian sovereignty movement and brought to the fore charged questions about who counts as Hawaiian.