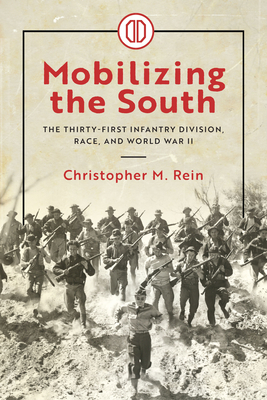 
Usually Ships in 1-5 Days
Recounts the social, racial, and political dramas that attended the deployment of a major Deep South infantry division, both at home and abroad

Chris Rein’s study of the Thirty-First Infantry Division, known officially as the “Dixie Division,” illuminates the complexities in mobilizing American reserve units to meet the global emergency during World War II. Citizen soldiers from Alabama, Florida, Louisiana, and Mississippi formed the core of one of the ninety infantry divisions the Army successfully activated, trained, equipped, and deployed to defeat fascism in Europe and race-based imperialism in the Pacific. But the Army mobilized ideas along with manpower, and soldiers from across the Jim Crow South brought their racial ideas and views with them into the ranks and then exported these across the South Pacific. If the American victory in World War II represents a “double victory” over racism abroad and at home, the division’s service is a cogent reminder that the same powerful force could pull in opposite directions.

While focused on the division’s operational service during the war years, Mobilizing the South: The Thirty-First Infantry Division, Race, and World War II spans the division’s entire service from 1917 to 1967, from an interwar period highlighted by responses to natural disasters and facing down lynch mobs through a postwar service that included protecting activists in the most important struggles of the civil rights era. But the division’s extended service as a training establishment highlights lingering resentments and tensions within the American military system between the active and reserve components. Despite this, the division performed well in General Douglas MacArthur’s island-hopping campaign across the South Pacific. Using official records as well as details drawn from correspondence and oral histories, Rein captures how individual soldiers framed their exposure to a larger world, and how service alongside African American, New Guinean, and Filipino units both reinforced and modified views on race and postwar American society.

Christopher M. Rein is managing editor of Air University Press at Maxwell Air Force Base in Montgomery, Alabama. He is author of The Second Colorado Cavalry: A Civil War Regiment on the Great Plains, Alabamians in Blue: Freedmen, Unionists and the Civil War in the Cotton State, and The North African Air Campaign: U.S. Army Air Forces from El Alamein to Salerno.

“Mobilizing the South is unit history at its best. Rein examines not just the organization, training, and combat employment of the Thirty-First Infantry Division before and during World War II but just as importantly explores its cultural ties to the Jim Crow South, its impact on racism in the Pacific War, and the legacy of its soldiers in the civil rights era that transformed America in the 1950s and 1960s.”
—Peter Mansoor, author of The GI Offensive in Europe: The Triumph of American Infantry Divisions, 1941–1945

“Rein has a superb grasp of the existing scholarship and addresses a number of key historiographical debates related to the combat effectiveness of the National Guard divisions in World War II, questions of race, identity, and military service, and the use of the National Guard in natural disasters and to preserve law and order in peacetime. His work fills a gap in our understanding of two significant campaigns in the Pacific War by examining the participation of the Thirty-First Division in operations to liberate Morotai and Mindanao in the Pacific Theater.”
—G. Kurt Piehler, editor of The United States in World War II: A Documentary Reader

“From the appalling repression of the Jim Crow South to the steamy desperation of jungle combat on Mindanao, Christopher Rein expertly immerses us in the world of the Thirty-first “Dixie” Infantry Division, a segregated all-white National Guard unit from the Deep South. This is by far the best Pacific War division history in existence, and Rein’s scholarship is first rate. He succeeds in capturing the many complexities of a troubling and largely overlooked aspect of the Army’s war against Japan.”
—John C. McManus, author of Fire and Fortitude: The U.S. Army in the War Against Japan, 1941-1943 and Island Infernos: The U.S. Army's Pacific War Odyssey, 1944