Gardens in the Modern Landscape: A Facsimile of the Revised 1948 Edition (Penn Studies in Landscape Architecture) (Paperback) 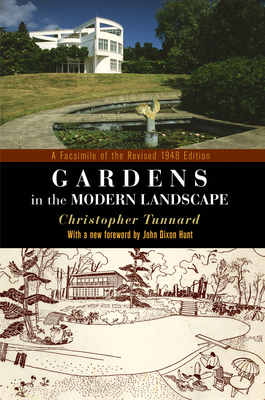 Gardens in the Modern Landscape: A Facsimile of the Revised 1948 Edition (Penn Studies in Landscape Architecture) (Paperback)

Between 1937 and 1938, garden designer Christopher Tunnard published a series of articles in the British Architectural Review that rejected the prevailing English landscape style. Inspired by the principles of Modernist art and Japanese aesthetics, Tunnard called for a new technique in garden design that emphasized an integration of form and purpose. The functional garden avoids the extremes both of the sentimental expressionism of the wild garden and the intellectual classicism of the 'formal' garden, he wrote; it embodies rather a spirit of rationalism and through an aesthetic and practical ordering of its units provides a friendly and hospitable milieu for rest and recreation.

Tunnard's magazine pieces were republished in book form as Gardens in the Modern Landscape in 1938, and a revised second edition was issued a decade later. Taken together, these articles constituted a manifesto for the modern garden, its influence evident in the work of such figures as Lawrence Halprin, Philip Johnson, and Edward Larrabee Barnes. Long out of print, the book is here reissued in a facsimile of the 1948 edition, accompanied by a contextualizing foreword by John Dixon Hunt. Gardens in the Modern Landscape heralded a sea change in the evolution of twentieth-century design, and it also anticipated questions of urban sprawl, historic preservation, and the dynamic between the natural and built environments. Available once more to students, practitioners, and connoisseurs, it stands as a historical document and an invitation to continued innovative thought about landscape architecture.
Christopher Tunnard (1910-79) was born in Canada and lived and worked in England as a garden designer and landscape architect before emigrating to the United States. He taught in the Department of Architecture at Harvard and, shifting his focus after the Second World War, became head of the Department of City Planning at Yale. John Dixon Hunt is Professor Emeritus of Landscape Architecture at the University of Pennsylvania School of Design and author of many books, most recently A World of Gardens and The Afterlife of Gardens, the latter also available from the University of Pennsylvania Press.