The Tug Is the Drug (Paperback) 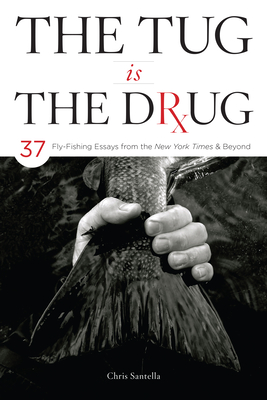 The Tug Is the Drug (Paperback)

By Chris Santella
List Price: $21.95
Our Price: $19.76
(Save: $2.20 10%)
Usually Ships in 1-5 Days
FISHING ADVENTURES FROM THE AUTHOR OF 50 PLACES TO FLY FISH BEFORE YOU DIE These thirty stories take readers from leaping makos near the fairways of Torrey Pines to midnight Atlantic salmon fishing on the fabled Ponoi to encounters with very friendly mujeres on the streets of Havana . . . and even offer an unauthorized (yet unequivocal) account of Bob Dylan's 1970s obsession with fishing. Santella's peripatetic lifestyle and eye for entertaining details--even those that have little to do with the act of throwing flies at fish--will make you look at fishing in a whole different way.
Chris Santella is a freelance writer based in Portland, Oregon, where he resides with his wife and two daughters. He is the author of 19 books, including Fifty Places To Fly Fish Before You Die, Fifty Places To Play Golf Before You Die, Why I Fly Fish and Fifty Places To Drink Beer Before You Die (all Abrams), and Cat Wars: The Devastating Consequences of a Cuddly Killer (Princeton University Press, with Dr. Peter Marra). The Fifty Places series has sold over 500,000 copies. Santella is a frequent contributor to the New York Times, Washington Post, Trout, Fly Rod & Reel, The Drake, American Angler, and Fly Fish Journal. His writing has also appeared in The New Yorker, Wall Street Journal, Travel & Leisure, and Links, among many other publications. When he's not at his desk, Santella loves to swing flies for steelhead on the Deschutes, Sandy, and North Umpqua Rivers, and to front Catch & Release, a four-piece rock band that plays original compositions...including a tune called "The Tug is the Drug."