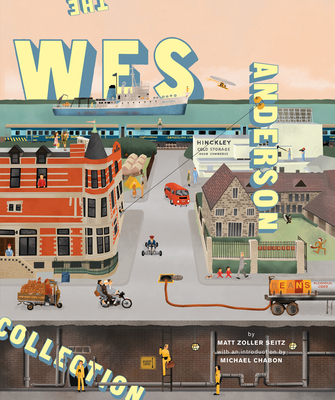 The result is a meticulously designed book that captures and reflects the spirit of Wes Anderson's movies: melancholy, playful, wise, and wonderfully unique.

Michael Chabon is the Pulitzer Prize-winning author of many novels, the most recent being Telegraph Avenue. He lives in Berkeley, California, with his wife and four children.

Max Dalton is a graphic artist living in Buenos Aires, Argentina by way of Barcelona, New York, and Paris. He has published a few books and illustrated some others, including The Wes Anderson Collection (Abrams, 2012) and The Wes Anderson Collection: The Grand Budapest Hotel (Abrams 2014). Max started painting in 1977 and since 2008, he has been creating posters about music, movies, and pop culture.

“Your coffee table wants—no, scratch that—needs this book . . . Packed with 400 images of everything from behind-the-scenes set shots to makeup inspiration to hand-drawn storyboards, the massive tome is pure eye candy. But in addition to the visuals, Seitz also dives deep into each and every Anderson film.”
— NYLON

“Each page of this book—filled with conversations, photographs and artwork surrounding each film—showcases Anderson’s pop-culture inspirations from Hitchcock and Star Wars to Jacques Cousteau and the French New Wave. Better than most of their kind, the talks reveal a candidness and honesty between critic and director, allowing Seitz to dig around Anderson’s vault and share his discoveries.”
— FILTER

“The Wes Anderson Collection comes as close as a book can to reading like a Wes Anderson film. The design is meticulously crafted, with gorgeous full-page photos and touches like a still representation of Rushmore’s opening montage.”
— The A.V. Club

“Reading the book, you feel as if you’re disappearing into the miniature world of Anderson’s movies, like you’re playing around in the files and fastidiously kept dossiers assembled for each project. In this way, the book mimics the work.”
— Complex.com

“The essence of a few of his beloved films… is captured in this New York Times bestselling overview.”
— Variety magazine