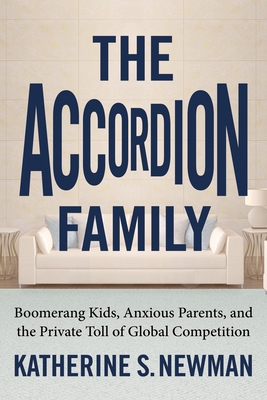 
Usually Ships in 1-5 Days
Why are adults in their twenties and thirties stuck in their parents’ homes in the world’s wealthiest countries?

There’s no question that globalization has drastically changed the cultural landscape across the world. The cost of living is rising, and high unemployment rates have created an untenable economic climate that has severely compromised the path to adulthood for young people in their twenties and thirties. And there’s no end in sight. Families are hunkering down, expanding the reach of their households to envelop economically vulnerable young adults. Acclaimed sociologist Katherine Newman explores the trend toward a rising number of “accordion families” composed of adult children who will be living off their parents’ retirement savings with little means of their own when the older generation is gone.

While the trend crosses the developed world, the cultural and political responses to accordion families differ dramatically. In Japan, there is a sense of horror and fear associated with “parasite singles,” whereas in Italy, the “cult of mammismo,” or mamma’s boys, is common and widely accepted, though the government is rallying against it. Meanwhile, in Spain, frustrated parents and millenials angrily blame politicians and big business for the growing number of youth forced to live at home.

Newman’s investigation, conducted in six countries, transports the reader into the homes of accordion families and uncovers fascinating links between globalization and the failure-to-launch trend. Drawing from over three hundred interviews, Newman concludes that nations with weak welfare states have the highest frequency of accordion families while the trend is virtually unknown in the Nordic countries. The United States is caught in between. But globalization is reshaping the landscape of adulthood everywhere, and the consequences are far-reaching in our private lives. In this gripping and urgent book, Newman urges Americans not to simply dismiss the boomerang generation but, rather, to strategize how we can help the younger generation make its own place in the world.

Katherine S. Newman is the James Knapp Dean of the Krieger School of Arts and Sciences and professor of sociology at Johns Hopkins University. The author of ten books on middle-class economic instability, urban poverty, and the sociology of inequality, Newman has taught at the University of California-Berkeley, Columbia, Harvard, and Princeton.

“Klinenberg and Newman flesh out their subjects with expertise and devotion, but neither forgets that ‘accordion family’ and ‘going solo’ are always less definitive terms than rich and poor.”—New York Times Book Review

“Brilliant and important.” —Robert B. Reich, author of Aftershock: The Next Economy and America’s Future

“Newman reveals that while the causes of children moving back home are somewhat universal … different cultures have very disparate ways of redressing the issue.”—starred notice in Library Journal feature

"Combining personal interviews with careful analysis of economic trends, and paying close attention to differences in cultural values and political structures, Newman sheds new light on the complex trade-offs that recent changes in intergenerational relationships and residence patterns involve for young adults, their parents, and society as a whole."—Stephanie Coontz, author of The Way We Never Were: American Families and the Nostalgia Trap

"In this wide-ranging book, Katherine Newman shows that the ages at which young adults leave their parents' homes are rising in developed countries around the world. She brilliantly demonstrates that the global forces behind this change are everywhere the same but that each nation interprets it in its own cultural way. Newman's insightful presentation of the stories of accordion families challenges us to re-think what it means to be an adult today."—Andrew Cherlin, author of The Marriage-Go-Round: The State of Marriage and the Family in America Today