The Origins of Totalitarianism: Introduction by Samantha Power (Hardcover) 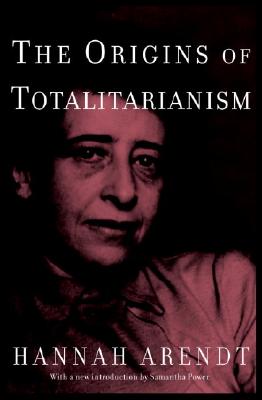 The Origins of Totalitarianism: Introduction by Samantha Power (Hardcover)


Difficult to Find
The Origins of Totalitarianism is an indispensable book for understanding the frightful barbarity of the twentieth century. Suspicious of the inevitability so often imposed by hindsight, Hannah Arendt was not interested in detailing the causes that produced totalitarianism. Nothing in the nineteenth century—indeed, nothing in human history—could have prepared us for the idea of political domination achieved by organizing the infinite plurality and differentiation of human beings as if all humanity were just one individual. Arendt believed that such a development marked a grotesque departure from all that had come before.

In The Origins of Totalitarianism, Arendt sought to provide an historical account of the forces that crystallized into totalitarianism: The ebb and flow of nineteenth-century anti-Semitism (she deemed the Dreyfus Affair a dress rehearsal for the Final Solution) and he rise of European imperialism, accompanied by the invention of racism as the only possible rationalization for it. For Arendt, totalitarianism was a form of governance that eliminated the very possibility of political action. Totalitarian leaders attract both mobs and elites, take advantage of the unthinkability of their atrocities, target “objective enemies” (classes of people who are liquidated simply because of their group membership), use terror to create loyalty, rely on concentration camps, and are obsessive in their pursuit of global primacy. But even more presciently, Arendt understood that totalitarian solutions could well survive the demise of totalitarian regimes.

The Origins of Totalitarianism remains as essential a book for understanding our times as it was when it first appeared more than fifty years ago.
HANNAH ARENDT was born in Hanover, Germany, in 1906, fled to Paris in 1933, and came to the United States after the outbreak of World War II. She was the editorial director of Schocken Books from 1946 to 1948. She taught at Berkeley, Princeton, the University of Chicago, and the New School for Social Research. Among her other books are The Human Condition, On Revolution, Essays in Understanding, The Jewish Writings, The Promise of Politics, Responsibility and Judgment, and The Life of the Mind. Arendt died in 1975.

“I’m more convinced than ever that this book, conclusively developed out of your clarity of vision, represents a major breakthrough for our political world, the first of its kind amid all the current talk of totalitarianism. Every politician ought to read it and understand it. If another author should follow you and put what you have grasped into a logical structure that is simple and easy to teach, one will still always have to go back to the source to participate in that power that enables others to see.”
—Karl Jaspers, in a letter to Hannah Arendt (1955)