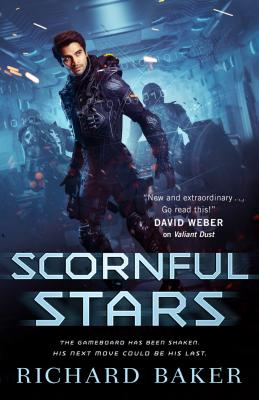 This is book number 3 in the Breaker of Empires series.

Richard Baker continues his new military science fiction series, Breaker of Empires, with vivid space battles and elements of politics and cultural heritage, picking up where Valiant Dust and Restless Lightning have led.

Now a captain, Sikander Singh North commands the destroyer Decisive, assigned to Zerzura, a haven for piracy and the next playing-board in the Great Game. The Aquilan Commonwealth and the Empire of Dremark vie for the allegiance of local ruler Marid Pasha, a competition with stakes that reach far beyond the sector's pirate-infested limits.

Sikander must stop the pirate attacks while charting his course between the ambitions of Marid Pasha, a dubious alliance with a shipping magnate, and the inexperience of Decisive’s crew...a situation that only grows more complicated when an old enemy returns.

Richard Baker is a former United States Navy officer and a well-known game designer and the author of several novels. He is a lifelong devotee of science fiction and fantasy, a history enthusiast (particularly military history), and an avid fan of games of all kinds.

Rich received his commission in the US Navy and served three years as a deck officer on USS Tortuga (LSD-46), earning his Surface Warfare Officer qualification. In 1991 he left active duty to begin a twenty-five year career as a professional game designer, first with TSR, Inc., and then with Wizards of the Coast. Some of Rich’s more notable game design credits include the Alternity Science Fiction Roleplaying Game, the award-winning Axis & Allies Miniatures Game, and the Axis & Allies Naval Miniatures Game—the best-selling naval wargame of all time. Rich began his writing career by working in the Forgotten Realms fantasy setting, which dovetailed with his day job as a game designer.

In 2011, Rich left Wizards of the Coast. He founded his own small-press game publishing company, Sasquatch Game Studio, in 2013. With Sasquatch, Rich created the savage world of Primeval Thule, a sword-and-sorcery game setting, and Ultimate Scheme, a game for evil geniuses. He also began working seriously on his own original fiction, seeking to combine his military experience with his love of history and science fiction—an effort that led to the creation of Sikander North and the novel Valiant Dust.

A native of the Jersey shore, Rich has resided in western Washington State since 1997. He married his college sweetheart, Kim Rohrbach, in 1991; they have two daughters, Alex and Hannah.

The Verge—Science fiction and fantasy books to read this November

“Baker's military background only serves to raise this adventure above the rest.”—Kirkus

“This new series gets a grand start with fine attention to the details of starship engagements and operations, plus plenty of action as well as depth of character.”—Booklist

“Valiant Dust is an excellent example of military SF at its best.” —Mike Stackpole, bestselling author of Rogue Squadron

“In the finest tradition of Honor Harrington, Black Jack Geary, and Nicholas Seafort . . . an exciting new entry that fans of the genre won’t want to miss.” —Dayton Ward, bestselling author of 24: Trial by Fire

“Intelligent space opera with lots of vivid action . . . sociological novel which examines the problems (on both sides) of a 3rd World aristocrat in a 1st World navy whose hierarchies are equally rigid.” —David Drake, author of the Hammer's Slammers series

“An excellent mix of military action and political intrigue.” —Eric Flint, author of the 1632 series