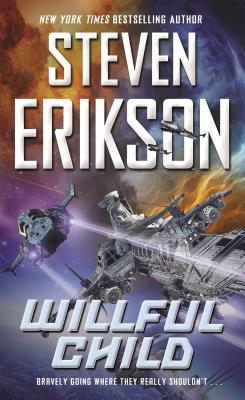 This is book number 1 in the Willful Child series.

From the New York Times Bestselling author Steven Erikson comes a new science fiction novel of devil-may-care, near calamitous and downright chaotic adventures through the infinite vastness of interstellar space.

These are the voyages of the starship A.S.F. Willful Child. Its ongoing mission: to seek out strange new worlds on which to plant the Terran flag, to subjugate and if necessary obliterate new life-forms, to boldly blow the...

And so we join the not-terribly-bright but exceedingly cock-sure Captain Hadrian Sawback and his motley crew on board the Starship Willful Child for a series of devil-may-care, near-calamitous and downright chaotic adventures through ‘the infinite vastness of interstellar space.'

The New York Times bestselling author of the acclaimed Malazan Book of the Fallen sequence has taken his lifelong passion for Star Trek and transformed it into a smart, inventive, and hugely entertaining spoof on the whole mankind-exploring-space-for-the-good-of-all-species-but-trashing-stuff-with-a-lot-of-high-tech-gadgets-along-the-way, overblown adventure. The result is an SF novel that deftly parodies the genre while also paying fond homage to it.

Steven Erikson is an archaeologist and anthropologist and a graduate of the Iowa Writers’ Workshop. His Malazan Book of the Fallen series, including The Crippled God, Dust of Dreams, Toll the Hounds and Reaper’s Gale, have met with widespread international acclaim and established him as a major voice in the world of fantasy fiction. The first book in the series, Gardens of the Moon, was shortlisted for a World Fantasy Award. The second novel, Deadhouse Gates, was voted one of the ten best fantasy novels of 2000 by SF Site. He lives in Canada.