The Viking Hondbók: Eat, Dress, and Fight Like a Warrior (Hardcover) 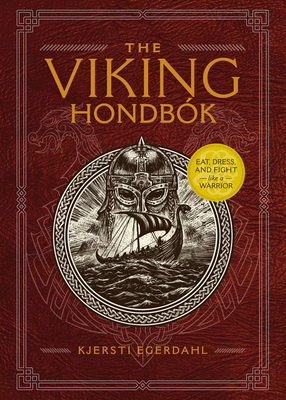 The Viking Hondbók: Eat, Dress, and Fight Like a Warrior (Hardcover)


Usually Ships in 1-5 Days
Learn what it was like to live as a Norseman in this fun and fascinating look at Vikings and the Viking Age.
Vikings, those ancient Norse seafarers, have inspired plenty of pop culture phenomena, from the A&E hit show Vikings to Thor: Ragnarök, to the ever-expanding world of Viking LARP. Known for being skilled craftspeople, accomplished merchants, hardworking farmers, and masters of the sea, the Vikings were a complex and captivating people.
Inspired by the legendary legacy of the Vikings, author Kjersti Egerdahl presents a compelling and entertaining guide exploring who the Vikings were and how they lived, from ancient Norse daily life to battles and adventuring. You'll learn how Vikings ate, dressed, and fought, and even how they weaved the perfect beard braid and built warships and weapons. Interspersed throughout is revealing historical anecdotes about Viking conquests, famous warriors, mythology and afterlife, and much more.
Kjersti Egerdahl has edited music and pop culture books on everything from Darth Vader to Jimi Hendrix to Buffy the Vampire Slayer. She is the author of The Viking Hondbók, a fun and fascinating look at Vikings and the Viking Age, and Green Day: A Musical Biography, a career retrospective on the world's biggest punk band. She lives in Seattle.