Russian-Turkmen Encounters: The Caspian Frontier before the Great Game (Paperback) 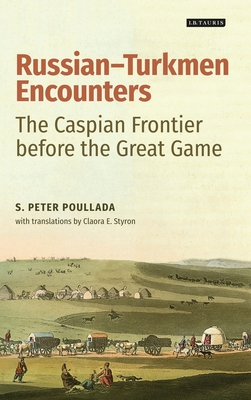 Russian-Turkmen Encounters: The Caspian Frontier before the Great Game (Paperback)


Usually Ships in 1-5 Days
In the mid-eighteenth century the Russian tsar sent two expeditions across the Caspian Sea in response to an extraordinary plea for assistance from the recently subjugated Kalmyk Khan. The official journals of these expeditions, here translated into English for the first time, record the encounters of Captains Tebelev and Kopitovskii (in 1741 and 1745, respectively) with the Turkmen tribes of the Caspian frontier zone. Together they form the basis for Peter Poullada's study of the relationship between the expanding Russian empire and the tribal peoples of Central Asia over a period of more than 200 years. Drawing on Russian archival sources and Persian and Uzbek chronicles, Russian-Turkmen Encounters provides a detailed exploration of the historical and political context of the encounters so vividly described in the two journals.
Poullada shows that before the better-known nineteenth-century rivalry between the Russian and British Empires, famously known as the Great Game, Russian merchants, envoys and explorers were engaged in a complex relationship with the various tribal and political groups of Central Asia: Turkmen, Uzbeks, Kazakhs, Kalmyks and even forces from the Safavid and Afshar shahs who ruled Iran. Russian-Turkmen Encounters provides a valuable new resource that will lead to a deeper understanding of Russia's imperial expansion and its involvement in the geopolitical and commercial rivalries with the major political groups in Central Asia during the early modern period.
S. Peter Poullada is a specialist on the history and cultures of the tribal peoples of Central Asia. He has travelled extensively throughout the former Soviet republics and Western China and lectures frequently on Central Asian carpets and textiles. He graduated in Near Eastern Studies at Princeton University and completed graduate research in Central Asian history and economics at the University of California, Berkeley