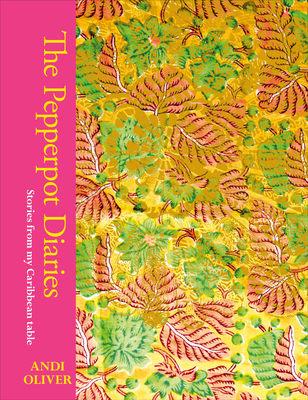 The ingredients we use in Caribbean cookery tell a story—and it’s a huge, swirling tale …

The Pepperpot Diaries is Andi Oliver’s long-awaited first cookbook. Showcasing both traditional and new recipes, cherished ingredients and vibrant flavors from across the Caribbean, let Andi Oliver take you on an exploration of identity and heritage as she shows you how to create simple yet sensational dishes that will bring the unbeatable flavors of Caribbean cooking to your table.

The story of food captured in this book will take readers on a journey around the melting pot of cultural influences, history, and heritage that has uniquely shaped traditional and contemporary Caribbean cuisine. Through her travels in Antigua, Andi shares her deeply personal journey on reconnecting with the food she grew up eating—the flavors and ingredients that run through her heart and soul—and what the future might hold for Caribbean cooking. This book explores who we were, who we are, and where we’re going—all through the food we eat and the people we meet along the way.


Andi Oliver is an award-winning TV chef and broadcaster. She is a regular face on our television screens as the host of the BBC’s Great British Menu, Sky Arts Live Book Club, Channel 4’s Beat the Chef and Food Unwrapped, and as a contributing chef and host on BBC’s Saturday Kitchen.

Throughout her career in the kitchen, Andi has spearheaded many successful restaurants, including The Moveable Feast and as Creative Director at The Birdcage, before launching her own kitchen at The Jackdaw and Star, a renovated pub in the heart of Homerton. Her award-winning restaurant Andi’s opened in 2016, and in 2020 Andi launched her newest food project Wadadli Kitchen, which showcases real Caribbean home cooking. Wadadli pop-ups took place throughout summer 2020, including at Somerset House and an offshoot of the Wadadli brand called One Love, created alongside Fred Siriex. This summer, Wadadli Kitchen has opened its doors to huge success in Hackney Wick, serving up Andi’s Caribbean classics. Andi recently interviewed Jessica B. Harris and Stephen Satterfield about their ground-breaking Netflix series "High on the Hog: How African American Cuisine Transformed America" at an event in partnership with The Oxford Cultural Collective and the US Embassy.