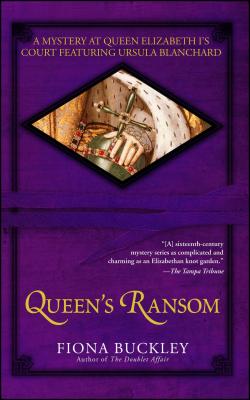 
By the Queen's command, she carried a letter that could alter the course of history -- or eclipse her own future....

Eager for a respite from her role as handmaiden to Queen Elizabeth I, Ursula Blanchard agrees to travel to France to help her first husband's father bring his young ward home to England. But duty soon calls. Fearing that the pro-Catholic forces threatening to tear France asunder will spread to Protestant England, the Queen instructs Ursula to deliver a secret letter personally to Catherine de Médicis, offering to mediate the crisis.

Not only will the perilous journey separate Ursula from her young daughter, it will bring her closer to a man she can neither trust nor forget -- her estranged second husband, Matthew de la Roche, avowed Catholic and enemy of Elizabeth. As it becomes clear that someone seeks to thwart her mission, she realizes she can trust no one but herself, and that only she can uncover the truth hidden in the shadows of treason, greed, and desire that darken her way.
Fiona Buckley is the author of eight historical mystery novels featuring Ursula Blanchard: To Shield the Queen, The Doublet Affair, Queen's Ransom, To Ruin a Queen, Queen of Ambition, A Pawn for a Queen, The Fugitive Queen, and The Siren Queen. She lives in North Surrey, England.

"[A] sixteenth-century mystery series as complicated and charming as an Elizabethan knot garden." -- The Tampa Tribune

"Now is a nice time for Tudor fans to light a flambeau, reach for some sweetmeats, and curl up with Queen's Ransom." -- USA Today