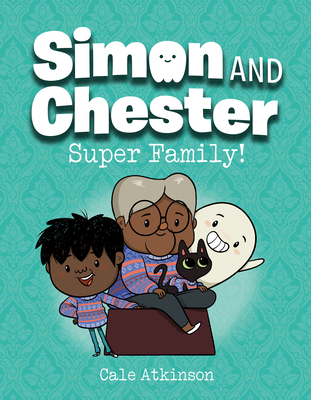 This is book number 3 in the Simon and Chester series.

Join Simon and Chester in their third adventure as they navigate family dynamics and a very important ghost conference! A hilarious new graphic novel series for fans of The Bad Guys and Dog Man.

Welcome to the world of Simon and Chester, ghost and boy duo extraordinaire.

Chester lives with his Grandma, his cat Mr. Pickles and Simon the ghost. Lately Chester has been feeling like he's missing out when he sees other families out doing fun family things.

So when Chester gets the opportunity to join his friend Amie and her family on a trip to the water park, he is IN. Meanwhile, Simon is off to his yearly ghost conference, excited to finally have something to show off about (haunting his VERY OWN HOUSE, for example) to the cool ghosts. Maybe they'll even accept him into their group!

Will things go as planned? Well, let's put it this way: both Simon and Chester are about to learn a thing or two about the old saying "The grass is always greener . . ."
CALE ATKINSON is an illustrator, writer and animator living lakeside with his family in Kelowna, British Columbia, whose books include Sir Simon: Super Scarer, Where Oliver Fits, Monsters 101, Unicorns 101, Simon and Chester: Super Detectives! and Simon and Chester: Super Sleepover!, to name a few. Cale is assisted in his artistic endeavors by Charlie, a wise and noble floof.