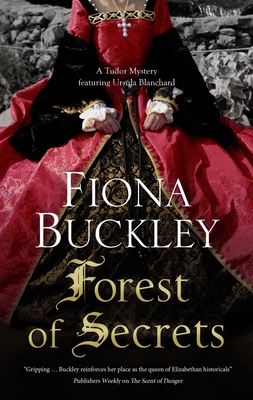 This is book number 19 in the Ursula Blanchard Mystery series.

Ursula travels deep into the New Forest to investigate rumours of a plot to overthrow Queen Elizabeth in this gripping Tudor mystery. May, 1586. Ursula and her retinue return home from a lengthy trip to discover she has an unexpected visitor. Etheldreda Hope is a simple countrywoman who has come to Ursula with disturbing tales of strange goings-on in her rural village. Fearing that Etheldreda's reports of mysterious forest rites indicate a possible conspiracy to overthrow Queen Elizabeth in favour of her cousin, Mary Stuart, the queen's spymaster, Sir Francis Walsingham, orders Ursula to travel to Etheldreda's home to find out what's really going on. On reaching Chenston village, deep in the New Forest, Ursula discovers an isolated, suspicious community; the locals deeply in thrall to the old pagan traditions and beliefs. But are these ancient customs harmless - or are they part of a genuine conspiracy against the queen? And, if so, who is behind it? It's not until the night of Halloween that Ursula will discover the shocking truth.
Fiona Buckley is the author of eighteen previous Ursula Blanchard mysteries, and a historical saga, Late Harvest. Under her real name, Valerie Anand, she is the author of numerous historical novels, including the much-loved Bridges Over Time series. Brought up in London, she now lives in Surrey.